So, I'm tired of adding LC to the pool every couple of days. At the beginning of the season my CYA levels were at zero, so adding a puck or two wasn't too big a deal. I have a Trichlor dispenser that I would keep on a low setting with a couple of pucks. It seemed to baseline the pool at about 1PPM, then I would add LC every couple of days. I don't like adding bleach regularly, I hate having my sinuses cleared when I open the Trichlor dispenser, I'm watching my CYA climb steadily, AND my wife has an open invitation to all the neighbors with kiddos that they can come swim anytime they like. Great! I'm running a public pool apparently. ;-) Its been really difficult to keep the FC levels stable unless I do something every day. I'll forget to add LC for a few days and my FC will drop to near zero. Then I'll add a gallon and it will spike. This can't be good for the pool, and I get stressed when I look out and see half the neighborhood in the pool, knowing that I'll have my tester in one hand and a bleach bottle in the other for a few days.

After a bit of research, I decided to rig up an LC dosing system that I can fill and not have to watch like a hawk for a week or two. I want it to maintain FC at a 2-3PPM baseline, and allow me to "shock" (add a measured amount of LC if needed) or SLAM with the push of a button. So I started gathering parts. I realized quickly that a parastaltic pump would be the best, but got a little sticker shock when I saw how expensive they are. I searched around and found an old Stenner 45M1 for 40 bucks on ebay that worked but needed to be rebuilt. 35 bucks later, I had a working pump that flows 64oz/hr at 25PSI. I also picked up a 20 gallon barrel (that smells like cherry soda), some 1/4 inch poly tubing and a few plumbing parts from the hardware store, and a Shelly1PM wifi switch from Amazon. For less than $150 bucks, and an afternoon of tinkering, I've got an automatic LC dosing system.

Setting up the barrel and pump was simple. My pool return line at one point had a booster pump for a cleaner. When I upgraded to a VS pump, I no longer needed the booster, so I capped off the line into the return. It made a perfect spot for the 1/4 tube insertion. My VS pool pump runs continuously, and from 10 PM until 10AM I have it set to drop to 1200 RPM. The pressure in the filter during this cycle is about 5-8PSI, and the flow meter says it runs about 20 gpm. I have the barrel setup just inside the garage. The poly tubing runs through the exterior wall and about 10 feet to the pool equipment.

The Shelly1PM is what makes this system so great. These are the coolest little devices; I've been playing with them for a few months now for custom lighting and have been blown away at how much they can do for automation - and they are super cheap. I have one on this system that kicks the dosing pump on at 10:01 PM, runs for 30 minutes, and shuts off. At 30 mins, I get about 32oz of LC dosed. Right now, my barrel has 12% in it so 32oz per day should be enough to keep me between 2 and 3PPM. If its higher or lower, I can adjust the timer. I also have a setting that if I push a button connected to the Shelly, it will kick the pump on for 30 mins and shut off, or, if I long push the button it will kick the pump on for 1 hour and shut off. I figure, if the bio load on the pool is super high - AKA neighborhood pool party, I can shock the pool with a higher dose. There is also a way to have it send a text when it kicks on or off, but I haven't had time to explore this yet. It is also wifi enabled and connected to the cloud, so I can kick the pump timer on from my phone or from the Shelly cloud website.

The system has been running about a week now, and so far things are running smoothly. I have to tweak a few little things, run permanent power to where the pump is, and vent the barrel outdoors. So far I'm pretty happy with this setup and LOVE that I don't have to stress about manually adding LC to the pool. I also LOVE that I don't have to run or open my Trichlor dispenser. I'm already itching to play with some type of sensor that can alert and dose based upon levels. The Shelly can take custom firmware and have external sensors. I might play with something like that in the future... emphasis on the might...
Last edited: Jul 21, 2020
Reactions: skola28, borjis and Mdragger88
P 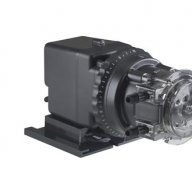 Thanks for choosing Stenner Pumps for your application. We are attaching the Basic Service Manual. If you have any questions, please do not hesitate to contact us.

Thanks for the service manual. This will definitely help me keep this running.
Reactions: Stenner Tech Support

pploco said:
Thanks for the service manual. This will definitely help me keep this running.
Click to expand...

Man, what timing. I’ve been on this site since I started researching putting in a pool. I discovered yesterday that my pucks were making my CYA go up. Even they were ‘chlorine only’. They ended up being tricolor. I figured this out when looking for them again and I couldn’t remember where I picked them up. I had been supplementing my liquid bleach with occasional pucks. Now we are back up to 90 on CYA. I emptied water and refilled over the weekend.
So anyways, I was googling for an in-line liquid pool add to put in place of my luck launcher and stumbled into this.
Let me study it more, I have access to a 3D printer and my next door neighbor has printed these pumps as part of his research in a world renowned biolab. Maybe there’s a way to create an outdoor proof enclosure that houses everything (but the tank) that I can set next to the pool plumbing. Thanks for posting!
P

I ran the power today and mounted the button switch to the wall. I’m super happy to have this in place.

I’ve had my Stenner running for 5-6 weeks now. I couldn’t be happier with the results. I have the Econ T with a built in timer. It works flawlessly.
Reactions: Mdragger88
M

Chasarms said:
I’ve had my Stenner running for 5-6 weeks now. I couldn’t be happier with the results. I have the Econ T with a built in timer. It works flawlessly.
Click to expand...

Thank you for choosing Stenner Pumps for your application. If you need assistance, please do not hesitate to contact us here.
Last edited by a moderator: Jan 4, 2021
J

Great work in the DIY!!!

Thank you for the kind words.
P

My CYA is about 40. I have the pump, barrel, and wifi switch in my garage. The poly tube runs through the wall along the bottom of my house siding and about 10 feet to the pool equipment.
M

Cool! - thank you for the guidance.
P

At a little over a week of dialing this in, my FC is holding steady at about 3.5ppm. The pump runs for 45 minutes each night. I did notice that on the output connector there was a drip of chlorine after the pump ran one night. I suspect the home depot fitting isn't PVC and is leaking slightly. I ordered some Stenner nuts to change them out. I'm still super stoked to have this in place, and not have to stress about adding LC every day.
V

What Stenner pump do you recommend I get if I wanted to build a LC system like you did? (I have a spool. 5500 gallons.)
P

I'm not that knowledgeable on the Stenner pumps. I only chose the pump I have based upon availability and low cost. I bet any of the Stenner Econ series 120v pumps would work for you.
Reactions: Stenner Tech Support
You must log in or register to reply here.
Share:
Facebook Reddit Pinterest Tumblr WhatsApp Email Link