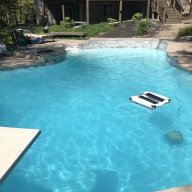 My pool has been open a few days. The pool company usually dumps in some chlorine and once I get all of the gunk cleared it typically clears and I take over testing and balancing. This year it is still green so I was planning to start SLAMing today. I use the TF-100 test kit. My CYA test doesn't seem to be working. The black dot isn't disappearing, leading me to believe it is less than 20. I've used the same test/chemicals last season and it worked fine. Could it be that the chemicals have gone bad? I'm not sure how much chlorine to add without knowing the true CYA level. Thoughts?

How's the water? Is is clear or is it a green swamp? Often, when someone's CYA disappears over the winter, it turns out that they have ammonia in the water. There's a bacteria that converts CYA to ammonia, so the first thing you have to rule out is ammonia. Do not add any more CYA until you know for sure. It will just make more ammonia from it.

Add 10ppm of FC with liquid chlorine and check it in 20 to 30 minutes. If it's almost all gone or under 3ppm, there's a good chance there's ammonia in the pool. Keep topping the FC back up to 10ppm and repeating the test until the FC starts to hold. If there's ammonia, you may have to add quite a bit of liquid chlorine until it's gone.

Once it holds, then add your CYA in a sock and go from there like usual.

One other thing, it's highly unlikely that your CYA reagent is bad. That one usually lasts the longest from what I've heard.
Last edited: May 23, 2021

The water is a milky green. I can't see the bottom of the deep end. I went ahead and added chlorine and just tested again, but an hour later. The FC is 3. I'm having an issue getting chlorine where I live. Ugh! It is a terrible time for a chlorine shortage. All of the stores are limiting how much you can buy at one time if they have any at all. I did also order a new set of chemicals for my test kit as well. I will need them soon anyway. I guess I'm off to track down more liquid chlorine.

Jordada said:
I went ahead and added chlorine and just tested again, but an hour later. The FC is 3.
Click to expand...

Did you test your CC?

Melamine (the key component in the CYA test) is incredibly stable. I don't think I've ever seen a situation where it had gone bad. If your CYA test is showing zero-ish CYA then I'd believe it.

Donldson said:
Did you test your CC?

Melamine (the key component in the CYA test) is incredibly stable. I don't think I've ever seen a situation where it had gone bad. If your CYA test is showing zero-ish CYA then I'd believe it.
Click to expand...

I should add, the FC test tube turned pink again before I added the chemical to test the CC. So I did it twice. It may not be an accurate CC. I will test again in another hour to see where I’m at.

That is a vital piece of information. You got some bacteria in your water over the winter that eats CYA and excretes ammonia, and now your water is full of it. And that means I have to say the worst thing to say if you're having trouble finding chlorine: it's going to take a lot of chlorine just to get your pool to hold enough chlorine to perform the SLAM Process.

To rid the water of ammonia the process we've come up with is to add 10 ppm FC and wait 20 minutes. Test again and if your FC has dropped below 5 ppm then bring it up to 10 again. Do this over and over until you test more than 5 ppm and then you can add 30 ppm of CYA and begin the SLAM Process. If you don't get rid of the ammonia then you can't be sure the bacteria is gone and if you add CYA it might begin consuming it and producing more ammonia. Once you can hold FC then there's enough in the water to kill the ammonia and you're good to go. Odds are if you had 3 ppm FC after an hour you don't have much ammonia in the water, but best to follow the procedure to make absolutely sure.

Thank you. I will give this a try once I get my hands on more chlorine.
You must log in or register to reply here.
Thread Status
Hello , This is an inactive thread. Any new postings here are unlikely to be seen or responded to by other members. You will get much more visibility by Starting A New Thread