CYA test says zero, but should I add more?

So I noticed my saltwater pool is struggling to keep up chlorine. There was a big storm here over the weekend, and chlorine read zero when I went to service the pool today. I ran the CYA test from my tf test kit, the reading was also zero, water clear all the way to the top. Maybe a little haze at most. My test strip says I have CYA though. Is it possible that the kit test has gotten old, or that rainwater at the top of the pool is distorting my results? Last year my CYA was probably around 40 when I closed the pool. I don't have a main drain, so I really don't want to over add as it will take me days to drain and refill the pool through the skimmers. What do you think?
W

Make sure the pump runs and the water is well mixed before you grab a sample. Are you following the CYA test procedures. It is possible that you have non but you have to be absolutely sure before you over shoot. What are the rest of the pool chemistry like, can we see them.
E

I just added 4 gallons of 12.5% bleach into the pool, so I don't think I can run the other tests until the chlorine comes down, but pre storm the PH was about 7.2 and the alkalinity around 80. FC is zero. I opened the pool with a slam in march and had some issues with my salt sensor, but I cleaned that up and now I have the salt at 3100ppm, which agrees with between the taylor test and the autopilot. The autopilot says 3000 is the ideal, and 2500-3500 is acceptable. It's a vinyl pool and I don't usually run the calcium hardness test, so I haven't looked at that in a while. I currently have a solar cover on the pool which is a new thing this year, as well as a heat pump. Not sure if the warmer temps may be affecting what I'm doing.

Now I know my salt seems to have dropped by about 25% over the winter, so it might make sense that I lost some cya too, but zero? But it does feel like I'm consuming chlorine faster than expected even after a slam. And since I opened the pool early this year, it was pretty clear to begin with. I have a mesh cover, and usually it looks like a swamp for a week when I open it.

Edit: I realized I should have tested the CYA when I opened the pool, but it's tricky to do as the water is somewhat cloudy anyway, and I usually just add a couple trichlor tabs when I open to replenish a bit. Perhaps I'm losing more than I thought.
Last edited: May 31, 2021
W

Not understanding why you needed that much chlorine. Make sure the chlorine holds minimum 5ppm to make sure there's not an ammonia issues here before you read on. Not sure why the FC was zero today. Something tells me with no FC and no CYA it would be difficult to say anything. My suggestion is get 30ppm cya in to the water now via sock method using granular stabilizer and get the FC up per 30ppm CYA. Do a OCLT to see if you have algae. If the OCLT comes out good then raise the CYA to 60-70ppm for the SWCG. Make sure you start the SWCG with a target FC using liquid chlorine and let the SWCG take it from there.
Reactions: Mdragger88
E

Thanks, I think I will do exactly what you suggested. I think the pool is something around 25000 gallons, usually one gallon of shock will raise the chlorine about 4 ppm. I guess with no CYA I may have over done it here, but a lot of junk went in from the storm.
W

Forgot to ask how are you testing as pool store and or guess strips aren't reliable for a balanced pool. 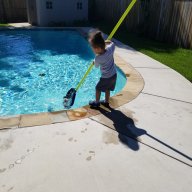 I'm not help, but just wanted to say I lost all my CYA between September and May. I wasn't testing it those months and we have had tons of rain too. So my fear of CYA never leaving is gone. Lol I've been adding it in small doses because I'm still cautious.

TLDR I'm in your situation too
E

wireform said:
Forgot to ask how are you testing as pool store and or guess strips aren't reliable for a balanced pool.
Click to expand...

Testing with the tft-100 kit. Sometimes I use a strip when I'm in a hurry. 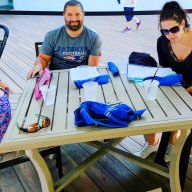 Tena said:
I'm not help, but just wanted to say I lost all my CYA between September and May. I wasn't testing it those months and we have had tons of rain too. So my fear of CYA never leaving is gone. Lol I've been adding it in small doses because I'm still cautious.

TLDR I'm in your situation too
Click to expand...

CYA leaves by being converted to Ammonia. Two years ago I had about 80 CYA at closing, and I opened to a black swamp and had 0 CYA.
E

I bit the bullet and poured 8 lbs of cya granules into the skimmers. 12 hrs later, I'm at about 20 ppm CYA by the tf-100 test. It's definitely no longer reading zero. I understand it can take a few days to dissolve, so I'm holding off on adding more. Reading tfp posts, it sounds like I could have an issue with ammonia if I lost that much CYA. It doesn't seem like my chlorine getting consumed in a few minutes, so hopefully this is not the case. Current readings:

If there is ammonia in pool water, the chlorine goes to 0 in a few minutes.
Your pool does not have ammonia.
Please do not pour any chemical directly into the skimmer again. It is not good on your equipment.
For CYA, use the sock method.

If you closed last year at around 40ppm CYA it’s very plausible that you still have some left in your water, just not enough to show up on the test. Keep in mind most CYA tests cannot read under 20ppm so you may have had slightly less than that. Regardless, adding more CYA is the right move. I wouldn’t stress about ammonia or anything like that as you’re holding chlorine. Creep up on your target and keep track of things so you know a proper FC level to aim for.

Has your water cleared up enough to swim?
E

Thanks, I see the benefits of the sock as much of the CYA pellets are probably sitting in my filter right now. The directions on the bag said to backwash the filter and then add directly to the skimmer, so that's what I did. Lesson learned. I'll give it a few days to run through before I backwash it again.

I think I'll aim for 35-40 and see how it goes there. Pool school says I want higher for an swg pool, but I fear it will become too expensive to slam the pool if I keep the CYA that high.

Yes, the water is clear and we've been swimming in it.
N

Hey Enough !!! Local to you I closed every fall with a CYA around 70 and opened to 0-20. We get 3 ft of off season rain and CYA degrades about 4-5 ppm monthly. No biggie in the season but when you walk away for 5-6 months, it’s gone between the two.

The first test each spring before mixing showed nothing at all besides rain results. A day of mixing brought everything back a little. Then you add from there like you’ve been. Give the salt and CYA some time and work up to the targets. Stay on top of the FC with liquid chlorine manually until the CYA is high enough to hold it. Then fire up the SWG and go from there.
Reactions: EnoughToBeDangerous and Leebo
E

Thanks Newdude, good to know. Last year I added no CYA and it seemed to stay around 40. However I did use around 8 trichlor tablets or so. The pool opened like a swap that year and the tablets made it a bit easier to keep up with the chlorine demand during the opening. I doubt that would have added 40ppm though. This year there's no tablets to be had, so I'm saving the few I have left in case there's a problem with the SWG.

Why does TFP recommend keeping CYA at 60 for an SWG pool?
Reactions: Newdude
N

EnoughToBeDangerous said:
Why does TFP recommend keeping CYA at 60 for an SWG pool
Click to expand...

To better buffer the small amounts of FC that the SWG produces gradually. When dosing with liquid you dump a jug and BOOM..... +4 or 5 FC. The SWG only produces .25 FC an hour (or similar, model specific of course) so it’s needs more protection or it would burn off as quickly as it’s made.

Ok I added another 4lbs of CYA and i'm around 50 now, I'm not sure my accuracy is great at reading the CYA test, but I think that's pretty close to what I'd expect. When I check the pool the FC had risen to 12, I had to adjust the SWG down. It looks like the taylor CYA reagent was pretty good, and my CYA was in fact very low.

How the heck would I have figured that out, or how much to add without a test? I am nervous about bringing it up to 70, but I think I'm going to put away the solar cover for the season, and will probably lose chlorine faster without it. My pool company doesn't like rolling it on and off, and I don't trust guests and kids to operate it safely.
N

EnoughToBeDangerous said:
How the heck would I have figured that out, or how much to add without a test?
Click to expand...

You wouldn’t have. You would have gone to the pool store and blindly done whatever they said until you were forced to drain and start over. With pricey re-balancing chems from them of course.

EnoughToBeDangerous said:
I am nervous about bringing it up to 70, but I think I'm going to put away the solar cover for the season, and will probably lose chlorine faster without it.
Click to expand...

50 has been fine between the easier UV up here, the early season, and the solar cover. You are losing 2 of the 3 though so you’ll want some more CYA. 70 worked great here for July and August.
E

Cool thanks. I have 1 more 4 lb. bag in the pool shed, so I'll test the water this weekend after I'm sure everything is dissolved, and then toss that one in. If I'm still short of 70 I'll use a trichlor tablet or two after rainstorms. Still have a few left, but not expecting any more to come until next year.
Reactions: Newdude
E

Well I tested again, and my pool is around 70-75. I definitely think it takes more than 48 hours for the cya to full dissolve and test on the Taylor kit. Now I'm not not loving this level so far.

Basically it makes the consequences of a mistake much greater than the might normally be. If the power goes out for a couple days, I'm buying a pallet of chlorine. We vacuum the pool to waste so maybe a few sessions will bring it down.

C
Should I lower CYA?

CYA is 0 - Pool service says it's okay and left it at that.