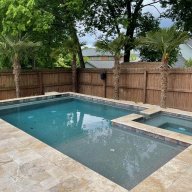 Our pool was finished in December 2020 and has been up and running with chemicals since just after the new year. Pool was built with an inline chlorinator (Nature2 mineral system) so it's been running that, set as low as it will go since we added chemicals. I am getting more into really learning my way and doing what is scientifically right and I'm testing and learning and learning and testing. So here's my couple of questions:

1. The pool was running Trichlor tabs since the first of January, on the lowest setting. My CYA levels for the pool are showing right at 70 now. Leslie's test said 71 and my Taylor kit matches that. Having never put any stabilizer in extra does that not seem high? Unfortunately I do not know exactly how many 3" pucks have dissolved into the pool at this point.
2. This leads me to my second question, even with the setting on my chlorinator as low as it will go, my free chlorine in the pool continually gets very high. Now some of this could have been my testing inexperience early on, but I was showing total chlorine at one point close to 20 ppm. Last week I pulled the chlorine tabs out of the chlorinator altogether as it had risen back up to well over 5 ppm again at that point. Even after pulling that out almost a full week ago, FAC is still only down to around 3 ppm. Is this normal? Is it the CYA working as it should? I feel like the FAC is staying very high and I have not added any chlorine in almost a week.

I do have the pump running 24/7 on a lower setting so it's probably cycling all the water three times a day. And now that spring is all but over there is a lot less pollen and leaves, etc. falling into the water. Still should the chlorine be staying so high without me adding anything to it?

About your questions:
1 - Yes. Tabs will shoot that CYA up quickly. Be sure they are removed and only use liquid chlorine or regular bleach from now on.
2 - Actually, your FC is quite low. To avoid algae, always go to our FC/CYA Chart to ensure the FC is balanced to your current CYA. You can see for a pool with a CYA of 70, your ideal FC range is much higher. It's safe, and the pool store won't tell you about it.

Now we have to ensure you don't already have algae. Is the water crystal clear? No green anywhere? Let us know. Also be sure to remove any Nature 2 mineral packs (metals). You don't need that headache. Stick to liquid chlorine or regular bleach.

Also, your sig shows a K-2005 test kit. Is that still accurate? If so, you need to order the FAS-DPD which upgrades your K-2005 to a K-2006. The FAS-DPD provides much more accurate testing with the ability to go higher as needed.

Yes, I do need to get the FAS-DPD add on for my test kit. Just haven't ordered it yet.

Water is perfect looking honestly. No issues at all. Crystal clear and the pool looks amazing.

So the Nature2 is not OK to leave the additional filter pack in there either? The PB sold me on that as a way to run chlorine in the pool but keep it at much lower levels (i.e. like 1 ppm). However, like I said, even running it on the lowest setting, it was still dissolving huge amounts of chlorine into the pool. I can assume now this is why the CYA shot up so fast too, although that still seems like a lot of CYA for the amount of 3" tabs that have gone in the water so far.

I am getting through all the articles in pool school and it's making sense so far. I'll probably pop some more questions in here at some point though. Thinking I'll still likely use the chlorinator on the rare occasions we're out of town for a while, but I'm here everyday so testing and adding in some bleach is no problem at all.

Siddious33 said:
The PB sold me on that as a way to run chlorine in the pool but keep it at much lower levels (i.e. like 1 ppm).
Click to expand...

Unfortunately, many installers do this to new buyers. But you do not want to keep using that mineral system. You'll increase the copper level and start seeing stains which are very difficult to remove. Mineral systems are no substitute for proper chlorination and sanitation. That's why chlorine is the industry standard for residential pools. For now, stick to liquid chlorine or regular bleach. Perhaps at some point in the future, you might consider installing a salt water generator to create free chlorine automatically which can make pool care just a bit more simpler.
M

I don't see what size pool you have in your profile, but each tab will raise CYA about 3ppm per 10,000 Gallons (from memory... each tab is about 8 ounces).

People are sold the notion that 'chlorine is a nasty chemical ewww', but at the levels needed for sanitation, when balanced with CYA, it's really not an issue. The chlorine smell and feel that are used to scare users are a result of incorrectly balanced water, not chlorine by itself. You should try to break through that mental block.

Unfortunately Fusion2 mineral system plays on that fear and is basically worthless. You really should remove it so that it doesn't get in the way of the flow and doesn't let any more metals into the water. We don't like using pucks here either, so the bad news is that the unit is now basically useless. If you've any leverage over your pool builder still, maybe see if they will swap it out for the Fusion Soft which is a good SWCG from that range.

No mental block on chlorine for me. I completely understand chloramines, smell, irritation, etc.

If I have the chlorine out of the feeder and the mineral cartridge as well, there is no need to remove the feeder from the plumbing line though. It's not blocking any flow at that point right?

Siddious33 said:
It's not blocking any flow at that point right?
Click to expand...

MITBeta said:
I don't see what size pool you have in your profile, but each tab will raise CYA about 3ppm per 10,000 Gallons (from memory... each tab is about 8 ounces).
Click to expand...

Pool is just under 10k gallons. Not big. About 9800 gallons roughly. And to your point, this is exactly why I cannot figure out how my CYA is at 71. That would take about 24 3" chlorine tabs going into my pool, with no water top off, overflow, etc. from January until now and there is no way I've used even half that many chlorine pucks.

Siddious33 said:
this is exactly why I cannot figure out how my CYA is at 71.
Click to expand...

Most pool builders dump stabilizer in the skimmer at some point. They rarely measure or test. Will slowly dissolve out of the cartridge filter. Can take days/weeks until it all shows up.

mknauss said:
Most pool builders dump stabilizer in the skimmer at some point. They rarely measure or test. Will slowly dissolve out of the cartridge filter. Can take days/weeks until it all shows up.
Click to expand...

Regardless, I caught it at 70 ppm and will work on lowering that via dilution this summer. I can work with 70 ppm. Just curious as to how it ever got that high, or to my original point in my first post, how I got total chlorine so high that my test kit required dilution to even measure it when I was using a chlorine feeder set on its lowest setting. Makes me wonder if something is wrong with that feeder. Moot point now really, but I was still planning on using it if we were gone for a few days.

You need a FAS-DPD test for FC. Your color matching test is not accurate and only sort of good to 10ppm
Reactions: Siddious33
You must log in or register to reply here.
Thread Status
Hello , There was no answer in this thread for more than 60 days.
It can take a long time to get an up-to-date response or contact with relevant users.

Just Getting Started May 7, 2021
GeauxTigerz
G
1
Chlorine levels are high

Taking a vacation for a week...