This site (link below) states that the max should be 15ppm for commercial pools. They also recommend similar levels for residential pools (30ppm max). The chart on the page shows drastically diminishing returns on CYA ability to protect chlorine from the sun after 30ppm. 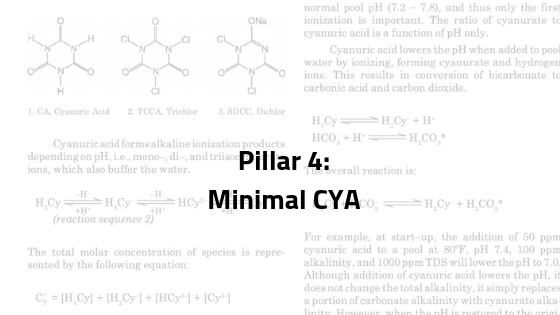 I see that the ABC's on this site recommends CYA levels to be 30-50ppm for non-salt pools. Is there really a good reason to go over 30ppm? The above link suggests that going above this weakens the chlorine with minimal additional protection from the sun. Is this data wrong and/or biased?

If you read the link you will see their main goal is to be able to use an ORP probe/system to control the FC level. The ORP sensors do not work well at CYA levels over 30..

Here at TFP, we believe that ORP systems often don't work at all, or tend to provide the wrong levels, so we do not recommend the use of any ORP system.

I agree that they are promoting ORP, but that seems to be independent of the data they are showing. Are you saying that these numbers don't apply if you aren't using an ORP system? If so, can you help explain that?

jlsesler said:
I agree that they are promoting ORP, but that seems to be independent of the data they are showing. Are you saying that these numbers don't apply if you aren't using an ORP system? If so, can you help explain that?
Click to expand...

What that page does not recognize, becasue of the techniques they are promoting, is the CYA/FC relationship that we summarize in the FC/CYA Chart

I don't want my response to sound argumentative. I am really just trying to educate myself (and hopefully others that are confused by this).

Thanks for the extra reading. The aqua magazine article that you linked seems to support this recommendation of <30ppm. If you scroll down to the end, it recommends <20ppm CYA. Reading the other links doesn't really answer my original question: "Is there a good reason to go over 30ppm?"

I always thought (somewhat blindly) that 30-50ppm was the correct target range until I read the site I mentioned above. Unless the charts and information they presented are incorrect, it seems they make a good argument for keeping values below 30ppm (ORP system or not). They do talk about CYA/FC relationship (min FC should be 7.5% of CYA level).

I am not sure what your question is?? In general we agree with the article, and a lot of what we "preach"... is based upon the CYA/FC ratio. As you can see in this chart... FC/CYA Chart

I just think that they are slanting what the article says to push their ORP system.. They leave out the fact that as long as you increase your FC you can increase your CYA and still end up with a well balanced, safe, and properly sanitized pool. Their whole problem is that the ORP can not work above 30 ppm CYA, so they are trying to make anything over 30 sound bad.

If you don't have an automated delivery system, then you either have to dose a million times a day, or you can simply increase your CYA/FC so that the sanitizer will last until the next dose of chlorine.

The CDC limit for public pools is not because CYA is bad, but that they are public.. Being public they have to run their FC much higher with less CYA so that when all the public people do what they do in public pools, there is an abundance of chlorine to handle the "leakage"..

If you have ever been to a public pool you probably still remember the smell and harsh feeling of the chlorine. Your swimsuits smelled for a week... We prefer to use the TFP method where the FC level is higher that a public pool, but due to the CYA, our pools do not have that chlorine smell and you don't feel dirty when you get out.

I see you have an ORP system... I would suggest that you do not let your CYA get over 30 ppm..

Thanks for the response, but I am a little confused still.

A 7.5% CYA/FC ratio means that it doesn't matter if the CYA is high or low. 10 CYA and 0.75 FC will yield virtually the same swimming experience as 100 CYA and 7.5 FC. However, the former offers virtually zero protection from UV degradation compared to the latter.

Orenda and Aqua are both industry focused, and as such targets those in the industry that must maintain CYA levels within certain parameters due to local regulations. Higher CYA results in less FC losses to UV degradation. As for the chart in question, I would like to see the sample size and other variables the study (from over 20 years ago, BTW) used. I would bet that they were not increasing the FC level with the CYA level and just sticking with the "3 ppm max" rule that was already outdated at the time of the test. Yeah, if you are only running 3 ppm FC then you won't notice much difference between 30 ppm CYA or 100 ppm CYA. You're talking about 0.03 ppm FC, which I would love to know how they were testing but I digress. It's been my experience that you notice a considerable increase in FC longevity when increasing from 30 to 50 CYA and running the proper ratio. Many on the forum can attest to this in their own pools, especially those running 80 CYA in their salt pools.
J

Thanks. It makes sense to me that the pool should feel the same with low or high CYA as long as the proper CYA/FC ratio is maintained. Maybe some more data/research is needed to conclusively say which is better (<30ppm or 30-50ppm). As for me, I am stuck with <30ppm since I have an ORP system. My pool is new, but I hope the be one of the few in the TFP community to give praise to ORP systems once I get some experience with it.

My advice is that the ORP will work perfectly... until it doesn't..

The real problem is that most pool owners assume it is working just fine, and never follow up with their own tests. Not until something bad happens do they realize that anything is wrong.. I suggest that you let the ORP control the pool, but that you still continue to run routine tests and make sure everything is where it should be.

We have found that the ORP probes will drift out of calibration over time.. As long as you can compensate for that, or re-calibrate, or replace the probe, then everything should be ok.. Obviously, if you don't continue to routinely test, there is no way to know when the probe goes South.

That is good information. My pool builder is requiring me to keep a weekly electronic test log of pool stats for warranty purposes (using the K-2006 kit). Hopefully that will help me stay on top of things if something goes wrong with the ORP system.

You may want to read SLAM Process. Just to be prepared for this summer.

G
Questions about CYA and other levels