Hi we're doing an in-ground pool and replacement of the adjacent patio and patio cover. We've learned from the patio contractor that -- surprise -- one of the two patio cover concrete footings (12" deep by 48" wide "spread footers") will now need go to directly over the assemblage of pool/spa pipes and conduits.

From rough measurements, most lines/pipes will be ~ 1 inch or less from the bottom of the footer, with sand to be placed between them. A couple lines may need to go directly in the side or bottom of the concrete footer, to be surrounded by a foam liner rather than pipe sleeving.

It's tough to move the footer because of the small yard -- makes the patio cover awkward shape at best. May or may not be tough to move the pipes closer to the pool, depending on whether that's allowed and how tight the turns are.

It makes me nervous on its face to have pipes an inch under a footing. In poking around a bit online, it seems like piping run under house slabs may often have several inches of dirt or gravel between them. So far, it's been suggested/surmised that the spread footer in our situation will distribute weight enough that it won't be a problem for the pipes underneath. Still waiting on final answers. If the pipes do get damage from settling etc, not sure how folks would get in to replace them when under/in a footing (itself completely surrounded by patio and pool deck concrete).

Is a footer resting right over pipes a source of long-term concern or threat to the pipes for leaks? Or is it a typical design plan -- or a typical accommodation or "hack" when needed? 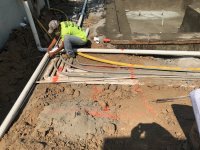 noob75 said:
Is a footer resting right over pipes a source of long-term concern or threat to the pipes for leaks?
Click to expand...

I think I would have a hard time sleeping at night, but let's see what others have to say. Welcome to TFP!

Footings typically are to be placed on undisturbed soil or on to soil that has been compacted. I am not a civil engineer or expect in soil. I would not be fine with a footing setting on pvc pipes or fine with pvc pipes being the support for a footing. if the footing can't be done any other way, reroute the pipes. I would feel better is the pipe were run though the concreate or thought sleeves in the concrete. Not sure if either is acceptable to do in a footer (i am guessing not).

Think about what will happen if there is any settling. The pipes break and now they are even more of a challenge to fix.
Reactions: noob75

Box in where the footer goes and tell the plumbers to work around it. That should have been done first. But PVC is inexpensive and a few days of plumbers time to reroute the pipes will prevent future problems.
Reactions: noob75
J

I would do a footer at both red areas and then use metal I-beams to span over the pipes. 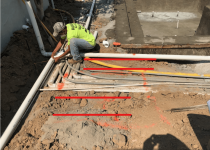 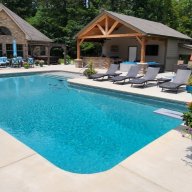 You do not want the footer sitting on top of the pipes nor do you want any pipes going through the footer.

As stated above, footings should be on undisturbed and/or compacted ground. The obvious best choice is to move the plumbing...I think your idea of the 2 footers with I beam might also work. It's really hard to say without knowing what, weight wise, is going to be sitting on it. I would run that by the patio contractor and see what they say.
Reactions: noob75
You must log in or register to reply here.