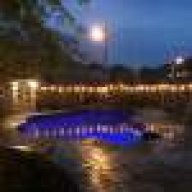 This morning we woke up to our pool water being a bit cloudy. I had my hubby test the FC and CC. The FC was 5 and the CC was 0. I couldn't deal with the situation right away because I was at work, so I had him shock the pool. He raised the FC from 5 to target of 20 (we didn't actually test to see if it reached target, just going by what the pool math said).

Once I got home, I tested everything. (and pool is back to being clear)

Our chlorine has actually been sitting pretty high since we opened the pool 2 weeks ago. It's been more in the range of 7-8, and I've been slowly turning the SWG down to keep it around 5, and the CC has always been 0. I'm confident the FC has never dipped below the acceptable range. What could have caused the cloudyness??

Although the water is clear now, I feel like something is wrong for it to go cloudy overnight and I'd rather jump on a problem sooner rather than later. Any insight or suggestions are appreciated!!

It is not phosphates. Cancel that order.

Could have been a number of things. But you had the tools to react and all is good.

If you add CYA, it is in the water. I assume you used the sock method.

I didn't use the sock method, I poured it in the skimmer.

To late to cancel the phosphate remover, it's already shipped. But I did check on this forum before ordering it and it was recommended to lower the phosphate. Is that not what you recommend? It wasn't to pricey and I can skip it if need be.
You must log in or register to reply here.
Thread Status
Hello , This is an inactive thread. Any new postings here are unlikely to be seen or responded to by other members. You will get much more visibility by Starting A New Thread

J
why is my water cloudy?