Brown swim out and steps 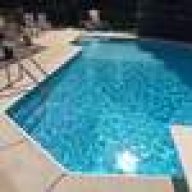 I had my liner replaced end of June and obviously had all new water trucked in. About 3 weeks later I noticed my steps and swim out were turning brown. Using a magic eraser I was able to clean them with the exception of right at the water line. I added a small amount of ascorbic acid to the eraser and the brown came right off. I assumed iron and must have gotten some real bad water. I have cleaned everything 3 times since for the same reason and the brown seems to be coming back quicker each time. I took a water sample to the pool store to check for metals and none were found. I am totally lost, no idea what could be causing this. In the 16 years I have had the pool I never had this problem. I should note the water is crystal clear. Below are some numbers, I test my own water with a TF-100 and only use bleach, borax and acid to adjust. As a side note I also noticed as soon as I started up the equipment after the liner replacement the pressure was way higher than it ever was before. Typically it runs about 10-12 and it was around 17. I have backwashed a couple of times and the pressure still does not come down to where it used to be, coincidence???

What's your test results on your fill water?

The water was brought in on tanker trucks so the water in the pool is the fill water, as said pool store saw no metals on test results.

Does the hauler only haul water? Do you have receipts showing where they got the water? We have dedicated water haulers and we have farmers with trucks that haul water in our area. The company I used provided receipts from the city water treatment plant.

Did you also clean and recharge the DE filter when you added the trucked in water? Or just backwash it?

The water is brought in dedicated tanker trucks and was brought from two different locations. My pool guy uses him exclusively and claims no other problems. Yes when I backwash I have to replenish with fresh DE, but I did not immediately after the pool was filled because I did it the day before the liner was installed so it was fresh when the new water went in.
You must log in or register to reply here.
Share:
Facebook Reddit Pinterest Tumblr WhatsApp Email Link

pH high : difficulty to define the next steps

M
Please help--newbie here and need help with next steps

N
Drain and Refill Done , advice for next steps please