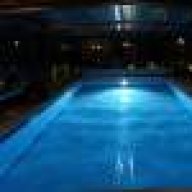 Hi
About a week ago I notice some black stains in the grout between my tiles. They were really small, maybe 5mm diameter.
Given that I’ve been keeping my FC up and CC is never above 0.4 I assumed this was black algae and so for the last 3 days I’ve been following the method for black algae in pool school.
just to be sure I did a slam on the first day and it passed the overnight test that night.
Anyways, I’ve been keeping the FC up and scrubbing with a wire brush 3 times daily and now the issue seems to be spreading. See photos.
it seems like my brushing is just spreading the problem to a wider area?
Does anyone have any thoughts as to whether this is black algae or another issue?
Should I just continue with the brushing and see if it kills it off?
should I try rubbing with a puck?
any help gratefully Received
Thanks
Ian

Ian, I"m curious if the darkening could be from copper? Do you happen to have any dry acid handy? If so, place some in a thin sock and try rubbing it on one of those stained areas to see if it helps. If it does, then you have copper entering the water from either the heater, local plumbing, or use of generic algaecides. If it doesn't help, then we may be back to the Black Algae issue and need to think it through a bit more.

Texas Splash said:
Ian, I"m curious if the darkening could be from copper? Do you happen to have any dry acid handy? If so, place some in a thin sock and try rubbing it on one of those stained areas to see if it helps. If it does, then you have copper entering the water from either the heater, local plumbing, or use of generic algaecides. If it doesn't help, then we may be back to the Black Algae issue and need to think it through a bit more.
Click to expand...

Hi, This morning when I got up it was worse than yesterday so I did the dry-acid in the sock and it has definitely made the patch a lot lighter. It didn’t eliminate it completely but it’s noticeably better. I’ll add a photo.
I did two socks full of dry acid rubbing two of the patches so I‘m reluctant to keep going as I’m worried about dropping the pH too low given I dropped it to 7.2 before I did a slam.
I’m wracking my brains to think how this has come into the pool.
we do have an air-source heat pump but this has been in place for 4 years and is still functioning fine. In fact it’s been quite warm here ( which is amazing for May in England!) so the heater hasn’t needed to come on for about the last week.
There is no direct water feed into the pool. If I need to top up the level I just use a hosepipe but I haven’t needed to do that in the last couple of weeks. I can’t think of anything that’s changed in the way the water is fed to the hosepipe.
I used an algicide over the winter but it says it’s non-copper based.
when I opened the pool at the beginning of the season I had a bit of pink slime in the pool which appeared to have come from the surrounding sandstone paving slabs. After a thorough pool clean including the light and a prolonged SLAM this has not returned ( as far as I can see).
At that point ( mid March) I did add two flocculent tabs which contain aluminium sulphate ( I know I’m not supposed to use these but they were on my shelf....)
So what else has happened lately ?
1. There was a huge fire in the hills nearby a couple of days before this appeared, but I can’t imagine how that’s relevant.
2. Last week, the pink fungus reappeared on some of the paving slabs near the pool and we scrubbed that away using a Household bleach solution. It lists ingredients as Sodium Hypochlorite, non-ionic surfactants, soap, perfume. I hosed this to the nearby drain. Maybe some of this splashed into the pool.
In terms of chemicals, at the beginning of the season I was struggling to get both Hydrochloric Acid and Sodium Hypochlorite and so was using Calcium Hypochlorite and Dry Acid but I’ve now sourced both liquids and have been using them for at least a couple of weeks.
sorry for the very long post but I wanted to get down everything I could think of.
so 2 questions:-
1. How do I get the metal out of the water?. I’ve never come across this before.
2. How do I stop it happening again?
Thanks again for the help!!
Cheers
Ian

In the meantime I read the “further reading” articles on Metals and copper. I read that high free chlorine can cause metals to disassociate from solution and cause staining. So could it be that the copper has been in the water for some time and then me doing a a SLAM when I maybe didn’t need to has pushed up the free Chlorine and caused the staining to appear?
doesn’t help with where it came from but maybe explains why it suddenly appeared now?

Ian, interesting info. The only way to truly remove metals is by a water exchange. If not 100%, at least enough to lower the iron/copper content enough to where it doesn't react to the metal when chlorine is added. Then a sequestrant can be used to help contain the metal in solution form. Yes, an elevated FC (and pH as well) can aggravate metals and cause them to precipitate out of solution for to cause staining and/or water color changes. While the dry acid did seem to have some positive effect, it doesn't mean 100% it's copper, but it's a possibility. Or perhaps some other metal is the cause. I just realized you never tried Vitamin C tablets for iron, so you can try rubbing a tablet or two on a stained area just as a test to confirm or rule-out iron as well. Some of the other things you have used (i.e. floc), pink slime, or the recent fire with the potential settling of soot on the water are interesting. I'm also not familiar with your heat pump to know if it has copper elements like some others. Chemically speaking, it's a getting a bit over my head, so I'd like to ask @JamesW for a second opinion. While waiting for James, try that Vitamin C test if you can. It might also help to see one one more full set of water test results and we'll go from there.
J

Try the vitamin C tabs dropped on a spot to see if anything happens.
Reactions: Texas Splash

Thanks guys,
forgive my ignorance but when you say vitamin c tablets, do you mean the ones you buy in a health shop or are there special ones for a swimming pool?
sorry it that’s a really dumb question ?
Thanks
Ian
J

Regular vitamin C tabs like from the pharmacy aisle.

Thanks - off to the supermarket in the morning to buy some!

So this morning I got some vitamin C and rubbed the spots but I don’t think it made a noticeable difference.
That said, the staining itself seems smaller in area and less dense this morning.
so this could be that as the FC is drifting down after the SLAM that the metal is falling back into solution?
Or maybe it was some sort of algae and the prolonged exposure to higher FC is killing it off?
One point of interest is that up close under water it is not possible to see any stain directly on the face of the tiles. What one does see is that the grout has small dots of a brownish stain. So it could be that the apparent stain viewed from the surface is actually the grout stains being refracted through the pool water and looking like a stain??
Also in the areas where the stain is the grout itself is pitted and has some small gaps in it. The pool was retiled 2 years ago so this is disappointing. I’ve Kept the CH levels at 250-350 which is what I was advised although on first fill the fill water had no CH and this wasn’t noticed for a few months so the damage could have been done early on...
So I’m none the wiser but I am feeling better that it’s not getting worse and maybe is getting better.
Any thoughts?
Cheers
Ian
PS I’ve updated a full set of test results in pool math and this is visible If you want to see them.

The one thing I notice on your Poolmath logs is that your CYA has been dropping over the past month or so. It appears to below the minimum recommended which can exaggerate the harshness of the chlorine. So if we're concerned about the chlorine potentially being responsible for aggravating metals in the water, you might consider increasing the CYA to at least 30, maybe even 40 if your pool gets a fair amount of sunlight.

Texas Splash said:
The one thing I notice on your Poolmath logs is that your CYA has been dropping over the past month or so. It appears to below the minimum recommended which can exaggerate the harshness of the chlorine. So if we're concerned about the chlorine potentially being responsible for aggravating metals in the water, you might consider increasing the CYA to at least 30, maybe even 40 if your pool gets a fair amount of sunlight.
Click to expand...

Hi - I was originally targeting 20-30 as (a) we have a telescopic enclosure over the pool which reduces the amount of sunlight and (b) we live in England which is a bit less sunny than Texas ?. I was advised ( on TFP) to keep it above 20 To offset the chlorine harshness as you advise which is what I’ve tried to do. Also on the measurement 20 or 30 is hard to really gauge. I do have an electronic tester which I’ve been using as well sometimes as a double check.
I will add some CYA to get back up to 30 this week and maybe that will also alleviate the staining issue.
cheers
Ian
Reactions: Texas Splash

So to close this post, I upped the CYA to 30 and I’ve kept at 5-6 FC for 10 days.
no impact on the stains. They’re not getting smaller and not getting bigger.
I can see some brown “pitting” in the grout on close inspection.
It’s definitely not black algae so I’ll close this post and start a new one with the updated photos.

Keep your new pics in this same thread so there is a history of your story.

So, the next instalment in my saga....
Here are some close-up underwater of the stains on the tiles.
it looks like pitting in the grout. Also there are some gaps in the grout.
I've posted a full set of test results this morning in pool math.
many ideas what it could be anyone?
Cheers Ian

J
So I used some copper algaecide to try to treat black algae. Didn't work. Now what?

N
Black/grey dust on bottom of the pool

B
Purple Blackish Stains at bottom of pool surface