I am using the following water cooler as my chlorine dispenser, 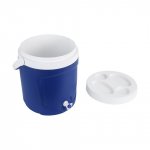 it works like a dream apart from the tap (button release) which has a metal spring and over time rusts and needs replacing. The hole in the cooler is 3/4" (19mm).
I was wondering if anyone else has used plastic taps and am looking for recommendations for one that pours well and doesn't drip.
I came across this link from the forums here and liked the look of this one. I am not in the USA so don't know where to get the equivalent in Australia where I am.
At one point in the past i used the chlorine drum and this drum cap tap which has a similar tap part. 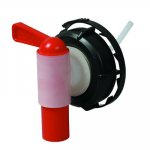 But I found it dripped where the black cap part meets the white cap part, so you had to keep the drum up and tilt it on its side when you want to use it. I found the whole thing messy and it was better to pour all into the cooler.
Any recommendations on which tap is the best for the job would be appreciated and preferably from somewhere that will ship to Australia at a reasonably price like E-Bay.
P.S.-
I was also considering replacing the spring in the existing tap (button release) with a noncorrosive spring but not sure what type of metal spring would be best for chlorine.

bleach ! on it or something. Improper storage of chemicals can be deadly at worst & dangerous at best.
Reactions: Leebo

Jimjones666 said:
I am using the following water cooler as my chlorine dispenser,
Click to expand...

Please do not do that. It is unsafe and ripe for an unknowing person, most likely very young, getting poisoned. It is never OK to place a hazardous material in a container normally used for potable liquids.
Reactions: proavia and Mdragger88
J

not sure whats available in your area but just do a search for carboy spigot View attachment 174586
- at the very least until u get a carboy or other proper container mark your container w/ a poison sticker & write danger ⚠ bleach ! on it or something. Improper storage of chemicals can be deadly at worst & dangerous at best.
Click to expand...

Thanks for the suggestion Mdragger88 I have already been looking at these taps, which are hard to find where I am, I was more interested in which style is best from people who have used them for chlorine, so I can be more specific on my ebay search.
As for drinking bleach I would think that no one would be stupid enough to do this but then again I am corrected here not sure where others keep there chemicals but mine is stored in a safe place. The carboys that you are using would not work here as all chlorine containers here must be protected from UV light and not be clear, also my cooler has a modified lid for ventilation. The cooler is great as the insulation in it keeps the temp of the chemicals lower which is good for my climate.
Anyone else who has experience using one of these taps feedback on which type is best would be appreciated, thank you.
Last edited by a moderator: Feb 2, 2021
G

You can go to a beer supply store and buy a beer bottling bucket and spigot.
Make sure you put a warning label and lock the container if possible.
You must log in or register to reply here.
Thread Status
Hello , There was no answer in this thread for more than 60 days.
It can take a long time to get an up-to-date response or contact with relevant users.

SWG or Stick with Liquid Chlorine