In September 2020, we had a new liner installed in our inground pool and closed the pool after about 2 weeks. Last week had a new concrete deck poured.

I obviously had to get the cover off to do this, so I opened the pool as normal, just about 2 months early. I made some minimal changes to the water balance and over the course of about 10 days I got the CYA to 30 using dichlor. When we finally had a date set to pour, I double checked everything and brought the chlorine up to SLAM level with liquid bleach because we were going to have to have the pump off for about 5 days.

After two days I ventured out onto the pristine deck and did a full test. FC was 0 (not totally surprised), pH was off the charts high (ok, so they got some concrete in the pool...), but surprisingly, TA and CH were basically unchanged at 80 and 100 respectively.

The water had been stagnant for two days, so I ran my robot and brushed before testing again with similar results. I slowly added dry acid while brushing and running the robot in between doses until I saw 7.8. I didn't want to chlorine at 0, so I added enough bleach to get to SLAM level again. When I checked the next morning I had 0 FC and 0 CC. Ok, whatever, add bleach again, this time a little extra for good measure, test the next morning and 0. pH still keeps climbing as well. Now I'm starting to question my test kit, so I bring a sample to the pool store, and they concur with my results.

I still have a day before I get the pump running, but does anyone have any advice? Should I keep feeding it bleach? Is the concrete using up all the chlorine? Will the pH keep rising until all the concrete is out of the water?

How much bleach are you adding- How much FC do you expect that liquid chlorine to give? Are you using PoolMath?

I'm unsure of what is causing the pH rise at this point, but please use Muriatic Acid to lower it and not dry acid. MA works faster, and is more predictable. Again, you need to use PoolMath to determine how much to put in based on your current pH and your desired pH.

Which test kit are you using and is it within dates for the reagents?

If you don't have or want the PoolMath app, the old web version is linked at the bottom of this page.

For future reference you always want to open/close your pool based on pool water temps. Open before the water hits 60 degrees and Close after the pool dips below 60 degrees.

I am using pool math and am adding enough bleach to reach 10ppm. I am testing with the taylor dpd for chlorine and phenol red for pH.

I understand the benefits of MA, but the thought of splashing some on my not quite cured yet $14,000 pool deck is too much.

I also understand the pool opening and closing times, but like I said, new deck dictated opening.

Update:
this morning I still had 0 FC and high pH after adding both last night.

Acid demand test leads me to believe I’m at around 8.8pH. I’ve switched to MA for financial reasons, hopefully I can get on top of this thing. 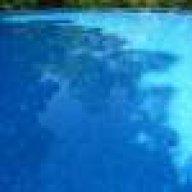 It sounds to me like your water is holding ammonia, it will test high ph, and eat chlorine like crazy until it is neutralized.
Is your CYA still testing at 30?
Test for chlorine, add bleach to slam level according to pool math. Mix well, and test again in 1/2 hour ... add bleach again until it starts holding chlorine levels for you.
MA will also be your friend in the process, but don't add bleach and MA at the same time. They don't play well together in their raw forms.
Last edited: Apr 9, 2021
T

RonsPlc said:
It sounds to me like your water is holding ammonia, it will test high ph, and eat chlorine like crazy until it is neutralized.
Is your CYA still testing at 30?
Test for chlorine, add bleach to slam level according to pool math. Mix well, and test again in 1/2 hour ... add bleach again until it starts holding chlorine levels for you.
MA will also be your friend in the process, but don't add bleach and MA at the same time. They don't play well together in their raw forms.
Click to expand...

My quick research shows that ammonia should come with high CC that I don't have...it's pouring out right now but when it let's up I'll check the CYA again. Ammonia would make sense, and maybe it was introduced by the stone or concrete.
T

I'm going to leave the pH alone and just track it to see if it is drifting back up. I'm now also going to start to SLAM and see if I can keep some chlorine in there.

that is odd.... ammonia will usually zero out CYA as well.
T

RonsPlc said:
that is odd.... ammonia will usually zero out CYA as well.
Click to expand...

Is it the ammonia that zeros out cya, or is it the bacteria that produces the ammonia? If I do have ammonia, it may have been introduced from the soil, stone, or concrete.

Well, ammonia is on the other side of the Acid - Base Scale, and is considered a base.
Any Base will cancel out an Acid , and CYA is Acidic so Ammonia should cancel it out.
I am going to call in a person that would know better than me about all this... Calling @JoyfulNoise .

I do not think this is an ammonia issue.

so it is not ammonia... you are struggling with an inability to hold chlorine, and High ph, not Low ph.
I don't know what concrete would have in it that would contribute to this.

Concrete is lime, so that is very caustic resulting in high pH.

FC loss can only be due to organics or UV. Or the bleach you are using is old.
T

mknauss said:
Concrete is lime, so that is very caustic resulting in high pH.

FC loss can only be due to organics or UV. Or the bleach you are using is old.
Click to expand...

I always question early season bleach...but it's what I have. I suppose I could try a dilution and test, but I'm not sure I have anything at home to measure it accurately enough.

There are many things besides organics and UV that react with bleach. It's a strong oxidizer so anything with a strong potential to be oxidized will react, including most metals.

Thank you everyone for your input, I'll keep updating and you keep the ideas coming. At the very least maybe if someone else has a similar issue they can find this thread.
T

My most recent test was:

Going to add some more bleach, and hopefully it's still there in the morning!

Not sure we'll ever know what was going on, but hopefully at least it will be resolved.

Thank you again to everyone
Reactions: RonsPlc
T

Water still isn't completely crystal clear so I'll keep slamming but fingers crossed that we seem to be okay.
Reactions: RonsPlc
You must log in or register to reply here.
Thread Status
Hello , This is an inactive thread. Any new postings here are unlikely to be seen or responded to by other members. You will get much more visibility by Starting A New Thread