Hi all, first time post, but I've been learning a lot here for some time.

I've had my old pump replaced with a SuperFlo VST (manufactured 04/21, so should be RS485 compatible) and have an existing IC40 SWG. I previously switched the pump and SWG on together using a timer, but after the pump upgrade my PB has left the SWG on all the time, relying on the flow switch (which, I've since read here is a bad idea). I also have a temp sensor, which is currently wired into a DIY wifi controller (which I had previously also used to control the timer and pump/SWG contactor). I'm doing away with the DIY controller and would like to implement some form of Automation, preferably as cheap as possible (<$500).

The IntelliSync looks to be able to control the pump via RS485 and take in the temp sensor, but not control the IC40 via RS485 nor does it have an aux relay to drop the SWG power.

These seem to be the only real sub-$500 automation options for what I want to do. The other non-automated options are to forget about remote temp monitoring and put the SWG on a timer or a current-sensing relay.

Am I missing any other options?

The IntelliConnect will not control the SuperFlo VST via the RS-485 cable. See the top of Page 5.

The SuperFlo's speeds can be controlled externally through digital input signals (see page 6). The pump provides a 5 volt external output and a wire for each of the four speeds (1, 2, 3, and Quick Clean). You could use a simple four channel wifi relay/switch to provide control/scheduling via an app (along with Alexa/Google Home/Samsung Things).

You can take a look at the low budget automation link in my signature. Having the 5 volt output makes it easier than my set-up.

For the SWG, I use a Sonoff Basic R3 switch.
R

This will control the SuperFlo as well as the RS485 for the IC40. It will also give you an easy to use interface that will allow you to configure the hardware and the software. On top of that it supports creating schedules and will allow you to add temperature sensors. From there you can control it with your phone, tablet, or favorite browser. The wiki also contains an article about how to set up the software for the standalone controller. 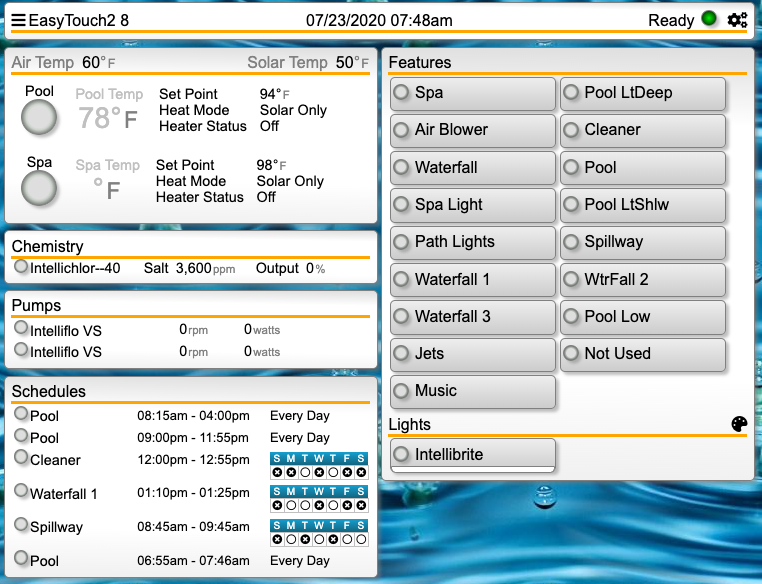 @rstrouse - what hardware do you run that on?

I'm currently running everything on a Sonoff 4Ch Pro with HomeAssistant, but this is going to become a rental property and I want the system to be as simple as possible for a tenant.
R

EDIT: People mostly run it on Raspberry Pi but it will run on Windows, Mac, or Linux.
Last edited: Jul 9, 2021
R

And it has a Home Assistant Interface

These pumps can be controlled from certain Pentair control systems, via an RS-485 signal, when paired with the RS-485 Automation Wiring Kit (P/N 356324Z - Black).

Note: IntelliConnect® Control and Monitoring Systems can NOT externally control this pump via RS-485. The pump will need to be connected via digital inputs. Refer to External Control via Digital Inputs on page 6.
J

@Rancho Cost-a-Lotta hmm, that almost seems contradictory. My assumption was that the statement about IntelliConnect not working for "this pump" via RS485 was referring to SuperFlo VS as well as VST manufactured before that date.

It seems odd that IntelliSync would be able to control via RS485 but IntelliConnect can't - I wouldn't imagine that the protocols are different?
R

Actually, there are two distinct communication methods used on these pumps. One ignores the 1-4 programming speeds and sets the speed or flow directly by setting the mode. So far I have only witnessed this on IntelliFlo VS/VF/VSF and SVRS models. This gives the ability to set a ~3000 speeds or 128 flow rates on the pump (although depending on the automation system this is limited to 8 or 16 slots).

The other RS485 control simply activates one of the 4 programs on the pump and reads the current status from the pump. This is done by changing the mode and sending command 1-4. The aforementioned pumps support this method as well as controlling the speed. From what I have read the IntelliSync does not send the required messages to keep the drive state set and only supports this method. In the end you are still limited to 4 speed settings at a time (actually it is 3+ when you boil it down) with any of the pumps. The difference between RS485 models is that it allow you to switch the relays over RS485 instead of hogging 4 relays on the automation panel.
J

Interesting. I decided to call Pentair direct and they confirmed that the new SuperFlo VST will work via RS485 from the IntelliConnect, so I think I'll go with that.

If you could, please follow up with the thread and let us know how it works.

Thank you.
You must log in or register to reply here.
Thread Status
Hello , There was no answer in this thread for more than 60 days.
It can take a long time to get an up-to-date response or contact with relevant users.