Are we OK?! ...Shooting Pool Shell - major issues with pump! ... then ran out of concrete! 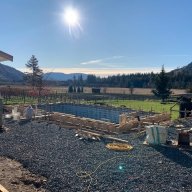 Hi All - so glad for this site - thanks to everyone who takes the time to help newbies like us.

Pool builder had a terrible day of shooting concrete - the pump didnt work so everything took longer than expected, they ended up working into the night to get it "complete" .

My concerns are that they basically RAN OUT of concrete, ie. concrete place was closed. It was a very stressful day for all. I took some photos of the process and the results - with a couple I'm concerned about....

1> the spa did NOT get finished. it's a 14" wall - looks like it's about 7" thick, and needs to be finished another time...
2> the top of the pool walls (where the coping will sit) in some areas did not fill completely! are the tiles going to pop off later?
3> There was a TON of concrete that just dumped (not shot) into the pool floor (see image) .... They had to remove the plugged hoses about 50 times, and it dumped blobs (is this considered rebound? if so theres a ton in there!) ... they shot over it in the end.
4> it was COLD ... 35 during the day, and down to 21 degrees the night they shot it ... (which they said helped or the concrete would have hardened during the many delays during the day) ... hope they're right! Just want to trust them!

PB said it's all fine, and maybe it is! .... but wondering if this impacts the integrity/longevity of the spa or the pool shell? Can they just add concrete to these areas and it will be fine? ... it's been a month since they shot it.

please let us know your thoughts!!!!

@bdavis466 said the following a while ago "The pool shell can be poured over multiple days. There will not be a cold joint if they prepare the unfinished edge correctly. This is common on very large pools and commercial projects since you simply cannot shoot enough gunite in one day "

It was way too cold for the concrete. Concrete really should not be poured under 45 degrees or over 90. There are additives that can be used outside of those conditions but why take the chance?

The blobs are not technically rebound but they weren't placed correctly and their integrity is unknown.

It looks like there is a lot of rebound on top of a very sloppy job. I understand they fell on poor circumstances but their issue should not be your problem.

It is possible to complete that shell but it would take a good deal of preparation and an evaluation by a structural engineer at the least. If that was my pool I would remove the entire thing and start over...probably not what you wanted to hear but that is probably part of the reason your pool has been sitting this long - the builder knows it too.
Reactions: an1vrsy

This is hard to hear, yes. To be fair they did come back and pour a retaining wall, the bench, the steps in the pool and the bench in the spa, but that was pretty chaotic too - for the retaining wall, they were tying rebar as the truck was pumping - it wasnt pretty. they did that pour in the rain, and now i see the spa is full of water (maybe this is ok) .... They seem to care, ... but to your point i feel like their unfortunate issues shouldnt be our problem

I hope there is an efficient way to have their work validated .... i dont even mind hiring my own engineer - exctly what type of engineer do I need? thanks again for taking the time to help people like us, just trying to do something awesome for our kids .... and there's free lavender essential oil in it for you too - we grow world class french lavender also for the kids!

A structural engineer that specializes in concrete is who you would want to see the project.

I'm sorry but pouring concrete in the rain while rebar is still being placed sounds pretty amateur. Was this not inspected/ permitted?

Concrete can't just be added to concrete. It will not adhere and a cold joint will be created. This is a serious structural compromise.

You might want to reach out to the engineer that designed the pool as well.

Were those walls formed and poured or just one side and shotcrete used? The way some of the walls were left don't really make sense

bdavis466 said:
A structural engineer that specializes in concrete is who you would want to see the project.

I'm sorry but pouring concrete in the rain while rebar is still being placed sounds pretty amateur. Was this not inspected/ permitted?

Concrete can't just be added to concrete. It will not adhere and a cold joint will be created. This is a serious structural compromise.

You might want to reach out to the engineer that designed the pool as well.
Click to expand...

bdavis466 said:
Were those walls formed and poured or just one side and shotcrete used? The way some of the walls were left don't really make sense
Click to expand...

....the reason the top of the walls looks unfinished is they RAN OUT of concrete, which is also evident in the spa. I actually have an testing engineer who knows shotcrete coming now....

I am in to learn from this one with you. Keep posting here and listening to Brian as he is a "Master Pool Builder" and overall a great guy who knows is stuff about building pools and houses!

Video of the shell:

That actually looks much better than what I was expecting and i think you'll be ok.

You're concern with the floor actually isn't that bad because you can pour the floor of a pool without using the pneumatic pressure. The actual floor itself sees very little structural stress. The biggest area to be concerned with is the transition from the shallow end to the deep end and where the floor transitions into the wall.

It looks like they shot the cove first which is a good thing because that's where you want most of the strength. The other place that you want to be strong is the bond beam or the top edge of the pool. It looks like they got that placed on the first night?

Shotcrete has the unique ability that when it is applied on top of itself within 7 days it creates a monolithic structure that isn't easily separated. Hopefully they finished up the pool within a week after that Fiasco.

The areas where there are still voids can be patched but they will need to use a bonding agent on the shell and use a very high-strength mortar mix to fill it in. Hopefully that's their plan.

In the meantime you can take a hammer and walk around the shell giving it some pretty good whacks and seeing if you can find any Hollow spots. If you find any they need to get chipped out until you get back to solid concrete but be careful not to disturb the rebar.

It's hard to tell from the pictures and videos alone but I think that you might be okay. I'd still like to hear what an engineer has to say about it because I'm just and uneducated knuckle dragger ...

Best of luck and Merry Christmas!

Brian
You must log in or register to reply here.
Thread Status
Hello , There was no answer in this thread for more than 60 days.
It can take a long time to get an up-to-date response or contact with relevant users.