Hi there, been lurking here for a while trying to find out how to do this but cannot figure it out.

I just had a new RayPak 8450 heat pump installed with a 3 way diverter bypass valve for the inlet and check valve on the outlet.

The problem is that even if the heat pump is off, if water is flowing through it, it seriously reduces the flow at current VSP (Jandy 2.7HP) speed of 2750. It looks like I'd have to max out to 3500 to get it to the same flow level. If I bypass the heat pump, it flows the same as before the heat pump was installed.

What I'd like to do is to only send water through the heater when it's actually heating, and then bypass it at other times. Similar to what the guy in this post did: AquaLink RS8 and Heater Control where he was also able to introduce a timer delay to allow for the cool down function to run on the Aqualink.

I have a JVA that I could install on top of the diverter valve for the heat pump but I can't figure out where I'd get a trigger signal from for his device since I'm using the fireman's switch on the low voltage heater terminals for remote control of the RayPak.

It would be great if this could all be done natively in the Aqualink but I can't see where to do it. I was able to control the JVA from the heat pump button in the iAqualink web app, but it looks like this operates independently from the Pool/Spa heat modes.

I found this page in the Aqualink manual. Based on this, could I just use the high voltage relay to close the remote wire connection from the RayPak heat pump? And then I can take advantage of the JVA connection to turn on/off the bypass valve (or use the instructions in the link above to wire in the time delay for the JVA). Instead of using the solar relay, I could just use the electric heater relay that the board has, right?

I figure the relay is just closing a connection so it shouldn't matter whether it's 120VAC or the 24VAC from the heater, right? I then wouldn't use the low voltage heater connections on the green bar at the top. 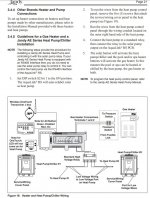 For the JVA I'd use the 3 pin JVA socket. On the relay, I was thinking to close the remote loop from the heater using the relay instead of the low voltage heater connections in the green terminal.

My thinking behind this is that the JVA is activated from the standalone relay so it could then be used to control the bypass valve.
N

But in case anyone is trying to do the same thing, this works like a charm. Just use a standard relay as per the Jandy manual to close the connection for the heater remote wire. So instead of using the low voltage heater contacts on the green bus bar, you are connecting the heater remote to one side of a relay. And then that relay should be controlled from the electric heater relay socket on the Aqualink board.

Everything else for the wiring is in the post above. Here's a picture of it wired up so that you can see the jumper settings on the timer board. 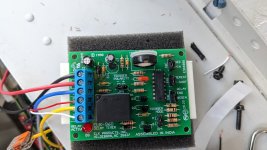 The one gotcha was that I didn't realize that the relay wires are (+) black and (-) red. So it wasn't working initially and when I checked using a multi meter, I noticed the polarity issue. Reversing the wires fixed the issue and I also had to set the trigger jumper to (-) since I had spliced into the red wire.

This works great so now the heater is bypassed when not in heat and after heating and the heater is turned off, it will keep flow through the heater for about 20 mins in my case (adjustable with the dial) and then switch the JVA back to bypass the heater.

The ELK timer module also has a test feature so it will cycle on each time the pump comes on. This is undesired but the hidden benefit is that there will always be some water going through the heater every day so it doesn't get stale, especially in the summer when I doubt I'd use the heater much.

Hats off to powerplay in the original thread for coming up with this. For $30, this is well worth it to keep me from having to increase the pump speed just to compensate for the heater restriction.
You must log in or register to reply here.
Thread Status
Hello , This is an inactive thread. Any new postings here are unlikely to be seen or responded to by other members. You will get much more visibility by Starting A New Thread