So, we have a problem.

We have a vinyl lined in-ground pool, 16X32, kind of a funky sloping deep end, no idea how old it is, we've been here almost 10 years. There was some significant damage to the liner below the level of the shallow end (details below), and the water just drained into the soil, I guess, leaving just the water in the deep end. We've got a new liner waiting for us at the pool store, but before the incident, we were trying to get the concrete around the pool replaced because it has shifted quite a bit. We were told that it would be best to get the concrete work done before the new liner. However, this has been a very wet season, and we haven't been able to get a concrete contractor lined up, and now it looks like we will basically be waiting until the end of the summer. Meanwhile, the water in the deep end just got, well, yucky, became a frog and mosquito breeding ground. We checked around, and it seemed to be ok to just pump it out, so I did that. Now someone else says that the pool being empty might put the pool itself at risk, and we should get the liner installed and the water in, but this seems like it would risk the new liner when we get the concrete work done. All the reading I've done seems to come down to 2 problems with an empty pool:
So, have the liner installed now to possibly save the pool itself, and risk damage to the liner during the concrete work? Or stay the course, wait for the shiny new concrete, then install the shiny new liner?

The incident? As near as we can tell, a deer got into the pool area, stepped onto the cover in the deep end, broke through, swam under the cover to the opposite deep end corner, tried and failed to get out, left behind some holes, tore up the cover some more as it worked its way to the shallow end, was able to to climb out there, leaving a 3 foot slash in the liner there, as well as several smaller tears.

Post some pics of your pool so we can see what you are dealing with.

What material are the walls of your pool?

I think the floor of your pool is vermiculite, not concrete.
B

Posting a couple of pictures. Let me know if you want to see something specifically.
It's steel walls, with a vermiculite floor.

This is the exact reason i went with a loop lock. My pool is 20 ft from my house and would flood my finished downstairs if a deer hopped the 4 ft pool fence. We are in a wooded area with deer everywhere. I saw this at 2 houses i worked at one winter a couple of years before getting my pool. 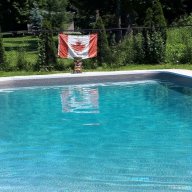 I don't know how likely an empty pool is to cause damage for ou. I do know that our pool was emptying for 2 months this spring while waiting for our new liner install. We also had a record level wet ar, and we have a very in water table where I live. The structure of our pool didn't suffer any. I wish you all the best with your repairs.
J

It all depends on how sound the steel walls are and how your water table is. If you have water coming into pool from ground it will undermine the floor and cause erosion and shifting. Yes its better to have pool empty when doing deck work but full pools are worked around everyday. If you plan on doing cantilever coping it needs to be empty for forms. You could find a demo contractor have him come in and bust and remove the concrete. There are lots of masonry companies out there you dont need pool guys for this if that's what's delaying you
B

I can't really tell if it's ground water or rain water in there now. It's been relatively dry the last few weeks, especially compared with the deluge that was seemingly all of May and most of June. Thanks for that line "but full pools are worked around everyday". We aren't doing cantilever. I hadn't thought about doing demo separate from the new concrete. Demo, new liner, fill pool, pause a month or two, new concrete, new cover. And a deer proof fence. Interesting.
J

That's a good way to space it out. The demo is the part you gotta be careful so if its empty the rest is not a worry. Just make sure anybody who demos concrete around a vinyl liner pool is very careful near the pool. We saw cut all the concrete inches from the coping and demo close to pool with a chipping gun. The rest with a mini excavator. It's very easy to damage the walls and supports ripping concrete carelessly it's often tied in under the lip of walls and the braces. My neighbor lost his pool last year due to inexperienced laborers doing just that
You must log in or register to reply here.
Share:
Facebook Reddit Pinterest Tumblr WhatsApp Email Link

J
Should I empty pool for deck renovation?