You are using an out of date browser. It may not display this or other websites correctly.
You should upgrade or use an alternative browser.
H

I'm getting air in the incoming water to the pool pump. I have narrowed the problem to the piping coming from the main drains in the bottom of the deep end of the pool. When the valve to that pipe is closed, no air enters the pump. Therefore, I've eliminated the piping from each skimmer. When I open the valve on the main drain piping, air enters the pump. Also if you put your hand around the PVC, you can feel the vibration of air bubbles flowing through the PVC. Unless the piping underground that is 14 years old has developed a crack, my first thoughts is that the air is entering around the shutoff valve handle when in the open position. Is this the first logical place to look for the problem? From what I can see, it doesn't look like it is serviceable so it would need a complete replacement.

I certainly would start with the easiest of items that you can get too, so the valve seems like a reasonable starting point. If after evaluating the valve and any internal seals, that doesn't work, you may have to leave the main drain off more than you would like. The pool will operate just fine with the skimmers.
H

A little more information. The valves on the piping from the main drain and skimmers are simple 2" PVC ball valves. The handles can be replaced but not the internals. The ball valves look like this: 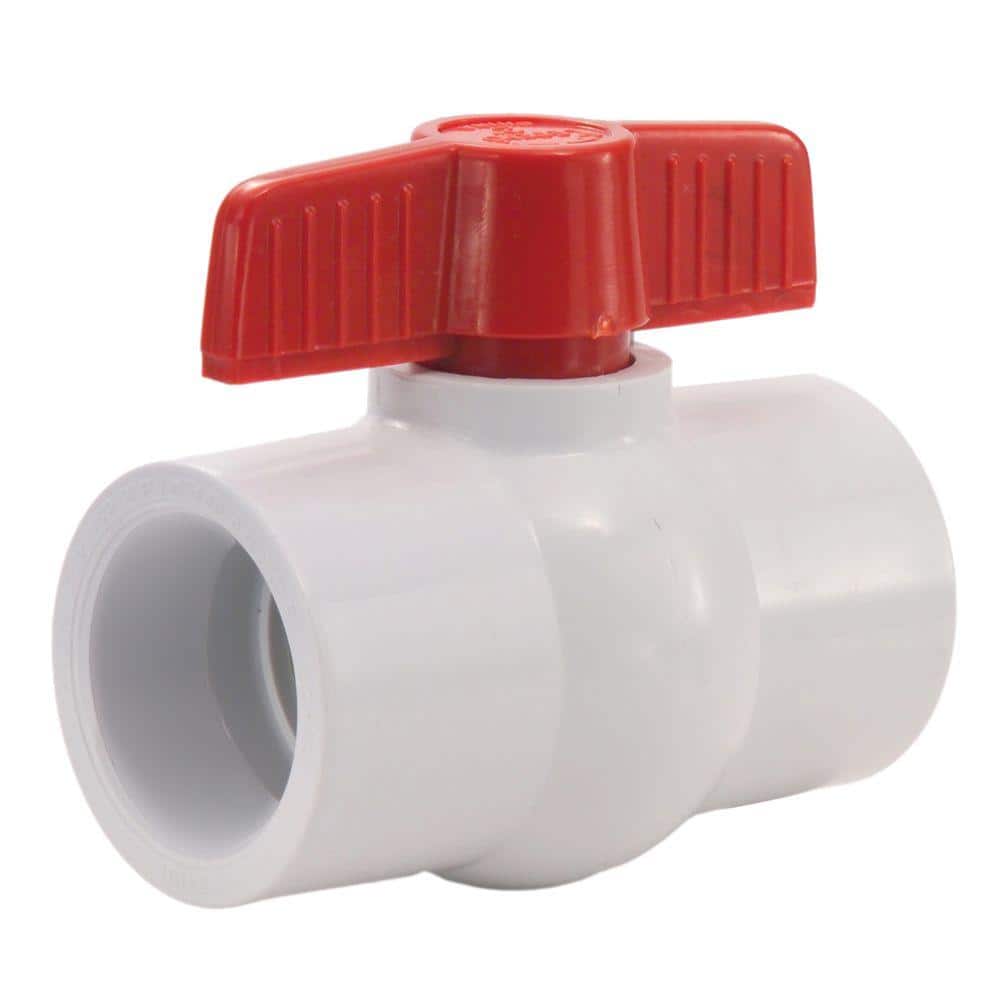 While doing some research, I found a tip I may try this weekend. Using a hose, run water over the stem on the valve while opening the valve. If the bubbles disappear or reduce in size, then the air leak is around the handle stem.

Let's assume the ball valve is defective. Now my question is what to replace it with. Yes, I could install another simple ball valve like the one that is in there now and linked above. Another choice would be a true union ball valve. The reason for this choice is that you can swap out the valve is there are any future problems with it.

Another possible solution is to use a 2" two way diverter valve like this Pentair model.

Is there a reason not to install a diverter valve on the pipe coming from the main drain to the pump? If there is a reason not to use, what about the true union ball valve?
J

Just a tip - Get a few sticks of burning incense, light them up and move them around the suspected leak areas... valves, joints, etc. Observe the wafting of the smoke-if it's get's sucked in there's your culprit. This obviously works on the suction side of the pump.

There is no reason not to use all diverter valves in pool plumbing. Diverter valves can easily be repaired and are not prone to sticking that ball valves are.
Last edited: Sep 28, 2020
H

jayinc11 said:
Just a tip - Get a few sticks of burning incense, light them up and move them around the suspected leak areas... valves, joints, etc. Observe the wafting of the smoke-if it's get's sucked in there's your culprit. This obviously works on the suction side of the pump.
Click to expand...

Thanks for the tip. Now I need to find out where I can buy some incense. Maybe I'll just buy a cheap cigar.
J

Homebrewale said:
... Now I need to find out where I can buy some incense. Maybe I'll just buy a cheap cigar.
Click to expand...

PVC ball valves are junk, they'll just keep failing. Use the Pentair part. This is how you locate an above-ground suction-side leak:

I did find the air leak. Using the water test, I found the ball valve that I thought was the problem is the problem. It wasn't noticeable at first because the pump was only running at 50% but when I turned it up to full speed to get more suction, the bubbles disappeared. I'm just thrilled the problem wasn't underground.
Reactions: Dirk
H

You are right. The problem I see is that as a homeowner, you turn to the experts to advise. In this case, you look to the pool builder to provide the proper equipment. My pool, built in 2006, was my first pool. From what I can tell now, my pool builder didn't provide options for the homeowner to consider and the pros and cons of each option. They just put in the cheapest stuff. I asked on Saturday. The pool employee said that's what they used but brought out the Hayward version that is similar to the Pentair linked above. I would have paid the increased price back then if I had known. I also mentioned that they didn't install unions on the piping to and from the sand filter so the top could be removed to deep clean the sand. He stated that they still don't. When the first sand change is required at 5 years (which we know doesn't need changed), they'll install them then. Just another way to nickel and dime you years after installation.

Yah, the problem is, whether you build or buy one with a home, you just don't know what you don't know about a pool! But you're with TFP now, so that'll put an end to such things if you make a habit of checking in here first, before you do anything pool...

Are you hiring someone to replace the valve, or DIY? It's usually a pretty simple job if you're handy. You can buy those valves on Amazon. Jandy makes a good one, too.
H

I'm actually having the pool company replace all three. I have only done limited PVC repairs, one being the unions on each side of the sand filter. While I could do it, I don't have a lot of spare time right now. I'll post up before and after photos when it's done.
Reactions: Dirk

You might consider posting up the before pic now, so we can give it a once over and determine if anything else needs addressing while your plumber is there.
H

Two photos - far and closer up. Before you say anything about the Nature 2 Express, the cartridge is 5 years old. I could have the pool company remove it but I may do that myself at my leisure. On the right, there are three suction side pipes coming from the pool. Ignore the labeling since I messed up the "S" for shallow end skimmer with the "B" which is the main bottom drains. The one ball valve in the off position was the most used over the years. I would turn off the main bottom drains when manually vacuuming so more flow went through the skimmers. These are the three ball valves being replaced.

Next to the pump is the booster pump for a Polaris 380. I bought a robot this year and could have the pump removed along with fixing the PVC to and from it but right now I still think of it as a backup for my robot if it breaks or needs repairs. In the front on the left is the return piping to the pool. There is a ball valve there that I could have replaced but I don't recall it ever being used. You can see my unions I put in myself. I didn't show you the piping behind the heat pump but there is piping to bypass the heat pump if needed.

This is what I would do were it mine:

I would use three three-way valves instead of four two-way valves. Cost might be less or a wash.

Assuming that tee just above the ground on the return side is going to each return, I would put a three-way there to be able to control both returns independently. You could customize your circulation, you could shut one off if you ever needed to (like if it started leaking), you could use one for a temporary sprayer or water-fountain feature and be able to balance that feature with the other return, etc. Just a nice option to have at the ready. I don't recommend you leave that ball valve there, as it will fail at some point, too. So as long as you're replacing it, give yourself some extra control.

The other two three-ways would replace the three ball valves on the suction side. Right now, it's possible to close off all the water to the pump, which you'd never want to have happen. Two three-ways would give you the same control over the three suction ports that you have now, but would prevent the pump from ever getting starved. One three-way would be used to balance suction from the two skimmers, the other three-way would be used to balance between main drain and the skimmer circuit.

Alternately, you could replumb the main drain to be a deep-water return. Stay with me. This would improve circulation, especially for heating. You don't need a main drain, and they do little for circulation. There are other, better ways to drain a pool. If you have only a single main drain (only one drain cover), converting it to a return would eliminate a rather dangerous entrapment possibility. This alternate plan would still only need the three three-ways, though it would be one on the suction side and two on the return side.

Just some options to consider.
H

Thanks for your input. I'll consider the advice on the valves on the returns. I never had to use the valve on the return but looking forward where I may want to shut down one so I could make possible repairs is a good idea. As the returns are now, you see two going into the ground but there are three on the pool. One is in the deep end and the other two are in the shallow end (one into the shallow end and one over the steps. I assume these two are split underground near where they come out since they are only a few feet apart. I don't ever have plans to add a water feature. I'm a simple person that just wants the basic inground pool to float in. The other stuff is just something else that can break.

I'll ask the pool company about the three ways. I do like the idea that all the valves can't be closed and starve the pump of water. As for the main floor drains, there are two to prevent what you said. I do understand what you say about turning the bottom drains into returns so heated water could be sent to the bottom of the pool. I already run my VSP at a low setting where the water out of the four current returns (pipe for Polaris is 4th return) barely moves the water enough to skim the surface. Add two more to the mix will just decrease that flow more. Probably just more beneficial to leave the bottom drains closed all the time.
Reactions: Dirk
H

Pumps, Filters, and Plumbing Mar 25, 2021
basjke
B
K
Air in pump basket and bubbles from returns....