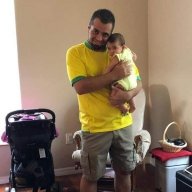 My sister has an in ground pool and has a SWG. Ever since I went swimming there when she bought the house I've been sold on the salt water system. Forward to now and were adding an above ground pool and burying 2ft.
The pool isn't specifically designed to handle salt water, at least it doesn't specify on the manufacturer site.
Obviously this is a permanent pool and I want to avoid having to replace the whole thing in 5 years due to rust.
Should I just stick with a non SWG system?
Pool is a Blue Wave Martinique 18x52 NB2612.

I do not have a SWG YET but I still had rust on the inside of my walls. It was found when we replaced the liner. I am guessing it is from the condensation between the wall and liner. I wire brushed it and painted over it and moved on. Should get many more years out of it .

I'd be much more concerned about rust from burying an above ground pool that's not rated to be buried than I would be from adding a SWCG.
Reactions: YippeeSkippy
G

My AGP was rusted all to **** before I added the SWG. It hasn't appeared to accelerate since.
N

Any scuffing / scratches created by assembly will rust either way.

Any scuffing / scratches created afterwards will rust either way.

Any dampness by either backfill or water trapped between the liner and pool wall will rust either way.

The ‘salt water’ is only 1/10 of actual salt water and isn’t going to make a difference.

I would do extra prep work on the pool walls to discourage the rust, and I would do that whether I buried it or not or used a SWG or not. I had a pool rust out and fail that never had a leak or used a SWG. I had condensation form between the liner and pool wall, and one section of the wall was affected more than the rest. I think using a spray on rust inhibiting coating on the inside wall surface would be your best protection against future rust.
Reactions: Newdude and Mdragger88

I have a mighty sun pool with resin top rails & uprights. It is the manufacturer of the pool u have. Mine specifically states that i can bury up to 36” & salt doesn’t void the warranty. None of the info I could find on your model mentions those things. Also the only resin parts seem to be the upright caps. The warranty on it is prorated after 3 yrs. You have to decide what your risk tolerance is & what’s the most important for you.
Some chose to wait to add something like a swg until they’re past the 100% warranty period. Also it allows you to get a feel for basic maintenance before you add another variable.
For what it’s worth i am on my second season & had some rusty bolts near the bottom of my wall panel - from rain water run off as the area around my pool was a muddy mess for quite some time Due to spring & fall rains. Be sure to to divert all water away from your pool as that is usually the worst culprit for rusting.
Reactions: Newdude

Mdragger88 said:
Some chose to wait to add something like a swg until they’re past the 100% warranty period.
Click to expand...

Not a problem for the OP...cause the warranty is void if any part of the pool is buried, and they are going to bury it 2'.

I'm planning on spraying the outside and inside walls with rustoleum spray paint. I was also considering wrapping the bottom in plastic but I'm concerned that it will trap moisture between the outside wall and the dirt. Im going to hold off on the SWG for a bit.

Good thinking ahead with the painting. I agree with your concern with the plastic so don't do that.

Have you found a good, easy source for liquid chlorine yet? If not start looking around so you can find the best price and ease of getting when needed.

J
Rusted ladder leg. What to do?