After talking to the electrician I was expecting to be able to run a white (neutral) from the outlet in the first pic to use for my smart switch. You can see in the photo where I fished a new wire through. When I wired it all up, the smart switch didn't work. I have the black wire from the original toggle switch connected to line and the blue wire to load on the smart switch. In the bottom pic with the smart switch, you can see that the white now goes in and goes out of the neutral terminal - it was initially passing through the box when the toggle switch was there. The white then connects to to the of the outlet in box below.
My thinking was this:
White = Neutral
Black = Line
Blue = Load
But I now suspect that I'm missing something. Any suggestions?

Thanks in advance!
-Pat 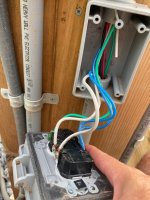 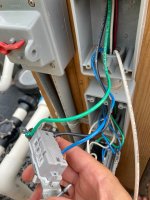 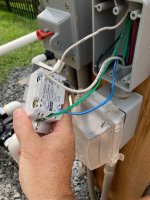 What is at the end of the load?

Do you have 120V between the blue and white wires at the smart switch?
P

I traced the blue back and realized it was not going to the light. Switch (HomeSeer WS 200+) is now working. Thanks.
You must log in or register to reply here.
Thread Status
Hello , This is an inactive thread. Any new postings here are unlikely to be seen or responded to by other members. You will get much more visibility by Starting A New Thread

Everything Else Sep 3, 2021
Rancho Cost-a-Lotta