I have an EasyTouch 8 system that currently has 4 open relays - my goal is to add the SPDT relay to AUX 7 to control my 3rd actuator.
J

OK - I spent most of today trying to get my actuator working... I think I'm close, but it is not quite there. I thought that I had followed the wiring diagrams from the previously linked thread perfectly, but here is my result:

From what I've read, I believe that the BLACK wire for the Pentair/Compool actuator is common with the red and white wires being switched... but I am not 100% on this.

Re: I have a need for a third valve for my system

Actuators work off of a three wire connection. One wire is common, one is turn one way, and the last is turn the other way.

From your description you are not supplying power to the "other way" wire when the relay is off. A SPDT relay is the right kind of relay, so it is capable of doing what you want. You either missed installing a wire, or have a bad connection somewhere.
J

Re: I have a need for a third valve for my system

Thanks Jason - I played with it for way too long today and couldn't get it to work... what you said makes total sense -- I'll test it out again tomorrow.

Also, from a configuration standpoint, I should be setting up the EZ Touch to control this relay under Aux 7 -- not as a feature.. right?

That all sounds correct.

Just make sure the red/white wire from the 24volt supply goes to the middle connection on the relay and the red out white whites go to the two outer terminals of the relay.
J

Post removed to eliminate confusion for any future reader of this thread..... See my post below for the correct wiring photos and description.

I haven't seen that particular arraignment of connections on a relay. It seems possible that you have the "center" terminal on the relay mis-identified. A little playing around with a multi-meter should allow you to confirm which terminal is the "center" one.
J

Finally got it correct --- here is the correct wiring for the IDEC SPDT that I purchased in case others follow a similar path: 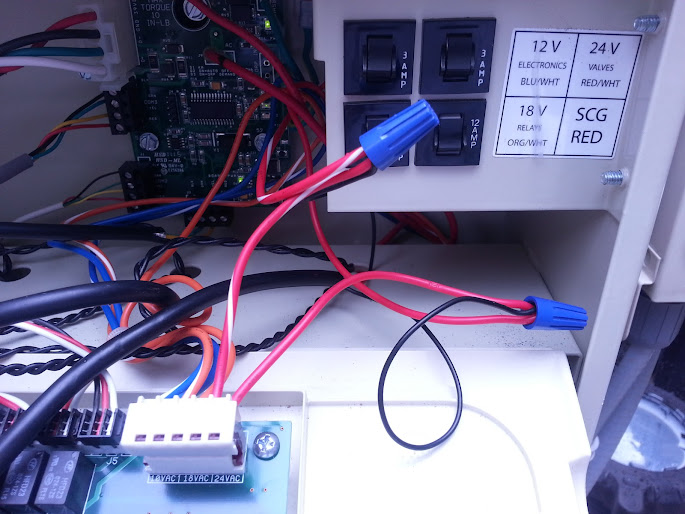 2) The spliced wire from the RED/WHITE connection in Step 2 above (mine is black) Is connected to Screw #9.

3) The RED & WHITE wires from the Actuator are connected to screws #1 & #5 -- It shouldn't matter which is connected where.

NOTE - I purchased a bag of cheap crimped spade connectors from Radio Shack for the wires connected to screws #1, #5, & #9 - This is not necessary as you could certainly just run bare wire under the screws.

4) I got some double-sided velcro tape to stick the SPDT relay into an open area in the High-Voltage area of the EasyTouch (I have space right above what was 'relay #7).

5) That's it.... the actuator will now turn one way when Aux 7 is activated, and turn the opposite direction when it is deactivated. 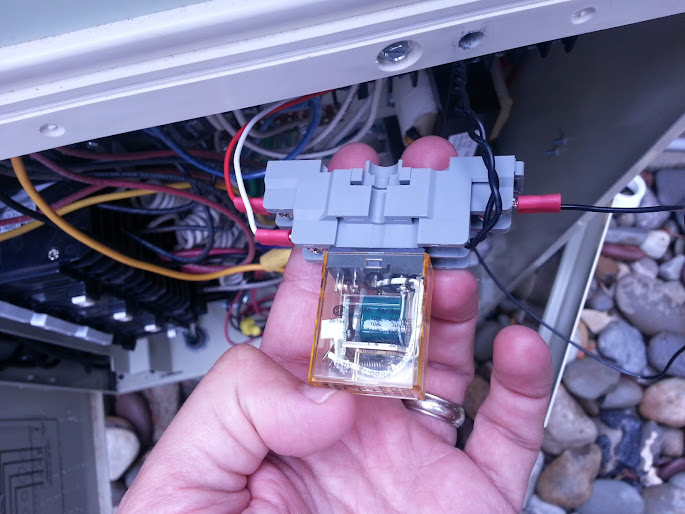 I found this post and I am trying to accomplish the same thing on the same system. however when I pulled up the relay it says it is a 24vdc relay. How does this work on a 24vac system. also why can I not just wire the 2 actuators together. no more than 3 on the circuit would be running at a single time?
J

jmcdtx said:
I found this post and I am trying to accomplish the same thing on the same system. however when I pulled up the relay it says it is a 24vdc relay. How does this work on a 24vac system. also why can I not just wire the 2 actuators together. no more than 3 on the circuit would be running at a single time?
Click to expand...

Why did you not just use the VALVE A or VALVE B connections on the EasyTouch motherboard to control your 3rd valve?

They are talking about a third user programmed valve in addition to the pool/spa valves. In reality it's a 5th actuator
X

jhav said:
The actuators in the EasyTouch system are DC --- not AC -- so, you need a 24vdc spdt for the EasyTouch
Click to expand...

I'm curious--I see in the photo, you are tapping into a power supply marked 24vac. So this seems to contradict.

I have mine set up similarly and have yet to have an actuator explode on me yet...

Last line states "Compatible with all 24VAC Control Systems" in the description of the CVA24s.
G

The motors in the CVA24 actuators are actually two AC synchronous motors, stacked one on top of the other one for each direction. The big mylar capacitor in the actuator is for phase shifting to get the activated motor started, depending on which of the two wires (white and black) has the 24 VAC applied in reference to the common (black) wire. Applying DC voltage to this type of motor would not cause it to turn whatsoever and may even overheat it.

Guys... I think what we have here is the typical "Failure to Communicate"...

I suspect it is just a nomenclature issue. Just to make sure everyone is on the same page...

The EasyTouch relay coils require 24 VDC to turn the relay on/off. The voltage passing through the relay contacts and going to the valve actuators is 24 VAC.

Just wanted to report that although this thread is older the info still works with my just purchased Easytouch 8 panel.
I just ordered the below items (searched for them or follow link in post #1 above). Then I just followed the instructions from post#8 above and worked as expected. It was all of $20 shipped for the parts and pretty easy to setup using the instructions. It does help to have experience wiring low voltage circuits and relays, but I think most can tackle this if you are somewhat handy. Sure beats buying the Jandy board for ~$120.
IDEC Corporation SH1B-05 - Socket
IDEC Corporation RH1B-ULDC24V - SPDT relay that fits above socket

How to Add an Automated Valve with EasyTouch?