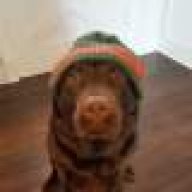 Today I received a " 3 years ago today.." notification on my Google images which marks 3 days since that huge box arrived at my door from Marina. I named her "Nessy."

Coincidentally, Nessy started giving me problems for the first time just yesterday. It would run for about 10 minutes and stop so I immediately thought "well... It's been nice!"

I took a few pieces apart and found the impeller loaded with hair and grass and in about 10 minutes time, Nessy has made a full recovery and is back to climbing walls today.

I replaced the brush rollers and tracks about 6 months ago and is the only expense I've had with it. It climbs the walls better after swapping out those worn down parts and was really easy to do as almost every serviceable part requires just a screwdriver!

The cable has started showing some signs of wear as it's peeling a little bit here and there. Along with the peeling, the plastic on the cleaner is looking a bit faded and bleached these days. For the first year it would get pulled out daily after cleaning but the last year and a half it's lived mostly in the pool day and night.

Would I buy again?

I would and I wouldn't. I would get another dolphin BUT id opt for the less expensive s200 version and save a couple hundred bucks over the s300i. Bluetooth control has been used a handful of times and I don't really bother with the extra cleaning modes it offers. I do like the filters in the s300i though and would want at least the same in my future unit.

Here's to another 3 hopefully!

Spoke too soon, only about half hour of run time now.

I removed the black box assembly and disassembled it to find two motors and a circuit board.

The larger motor of the two is for the directional jet and I decided to open this motor up by removing two long machined screws. It was FULL of carbon inside. This is a brushed motor and the brushes are worn down pretty far. I had to disassemble and clean everything with electrical contact cleaner to get it cleaned again. The two bearings inside were still smooth and free rolling so I left them alone.

Couple of thoughts, why aren't these motors brushless?!?! Do they sell a brushless motor version?

Anyone have a lead on these small motors or the brushes for them?

Also, is there any way to check faults thru the app or blinking light on the front of the cleaner or power supply. I had no indication anywhere that anything was abnormal other than no movement.

Did you replace the brushes? If not a suggestion, find some brushes which are the same size or a bit larger (eBay?). Use sandpaper to reduce the size to fit.

Brushless DC motors are quite a bit more expensive (about 4~5x).
Reactions: GregInClaremont

dschlic1 said:
Did you replace the brushes? If not a suggestion, find some brushes which are the same size or a bit larger (eBay?). Use sandpaper to reduce the size to fit.

Brushless DC motors are quite a bit more expensive (about 4~5x).
Click to expand...

I've ordered some generic brushes on Amazon and they should be here on Wednesday. I will be getting those fitted and soldered in this week and see how it does.

After a second look at them yesterday they are completely used up!

I finally got the new motor brushes installed on the impeller motor last night and it was a partial success.

I goofed up when reassembling the motor box assembly and hadn't realized the large O ring had slipped and partially fell inside the box instead of being seated properly on the lid before snapping the latches shut. I had it in the water for about 2-3 minutes when it just stopped moving and the led went dark. I put it back on the bench and disassembled and found water had filled up the box to the bottom of the circuit board. The drive motor was soaked and the dessicated bag was as well.

I let it all air dry overnight and used some alcohol and a q tip to clean the bottom area of the board where some residue had built up and then...I scrubbed a tiny chip off the board

. I don't know what it does but figured it was worth a shot so I reassembled it properly this time and it's back in the water.

Everything is working again that I can tell and it seems to climb better than it has in a long time. It's been in for about a half hour now and doing well... Still don't know what that tiny chip is for though!

Reactions: FlowBlu and Mdragger88
You must log in or register to reply here.
Thread Status
Hello , This is an inactive thread. Any new postings here are unlikely to be seen or responded to by other members. You will get much more visibility by Starting A New Thread