2 year old Lochinvar heater: keep it or pitch it?

We have a Lochinvar ERN252 that was installed by the house's previous owner right before they listed the house for sale. (It's six weeks outside the 2 year full warranty, but still within the three year heat exchanger-only warranty) We went on vacation two weeks ago, and when we got home we noticed that the pool was low. The next day, I noticed water leaking out of the heater. I removed the top and front covers and found water leaking out of the burner tubes. Not good.

So I called Lochinvar, and they referred me to a local dealer. They were able to come out that afternoon to troubleshoot it. We opened up the combustion chamber, and found an obvious leak in the heat exchanger (there is a hole in the last return tube, and not a small one!)

Long story short, the repairman contacted Lochinvar, and sent me a quote. If I front the $1900 for the new heat exchanger, we can send the old one back and they will evaluate it to see if they will warranty it. The total quote worked out to $3500!! (Plus the $170 I already have into it for the call out. He included new temp sensors, ignotor, flame sensor, bypass valve, and gaskets.) At most, I *might* fet the $1900 nack from the heat exchanger if, and only if, Lochinvar seems it a warrantable failure. I'm still on the hook for the $200 to ship the old one to them and the new one back.

(By comparison, he quoted $3000 new, plus $1000 for installation. I about fell over! Installation? It's three wires and a gas line! No plumbing involved! If it takes an hour, something's wrong!)

I pulled the heat exchanger myself, and disassembled the manifold. It looks defective to me, not a freeze issue (which I already knew. I drain it, then suck it out with a shop vac to be sure it's dry).

Shopping around, I could replace the heat exchanger for about $1200 and buy the $35 "gasket" from the local o-ring supplier for about $7. If I spend the hundred bucks to ship it back, it may be throwing good money after bad if they won't warranty it. Is it worth it to try and rebuild Humpty Dumpty under warranty? This unit brand new is about 2 grand delivered (online), and I would have a pile of spare parts. (Basically everything but the heat exchanger) I could also ditch the Lochinvar for a Raypak or Hayward for about the same price... I've even considered silver soldering the heat exchanger to buy me a few more years, but I don't have a lot of confidence in Lochinvar if this thing only made it two years to start with...

So, what do the experts say? Take a chance on the warranty? Repair it myself? Dump it for a new one? 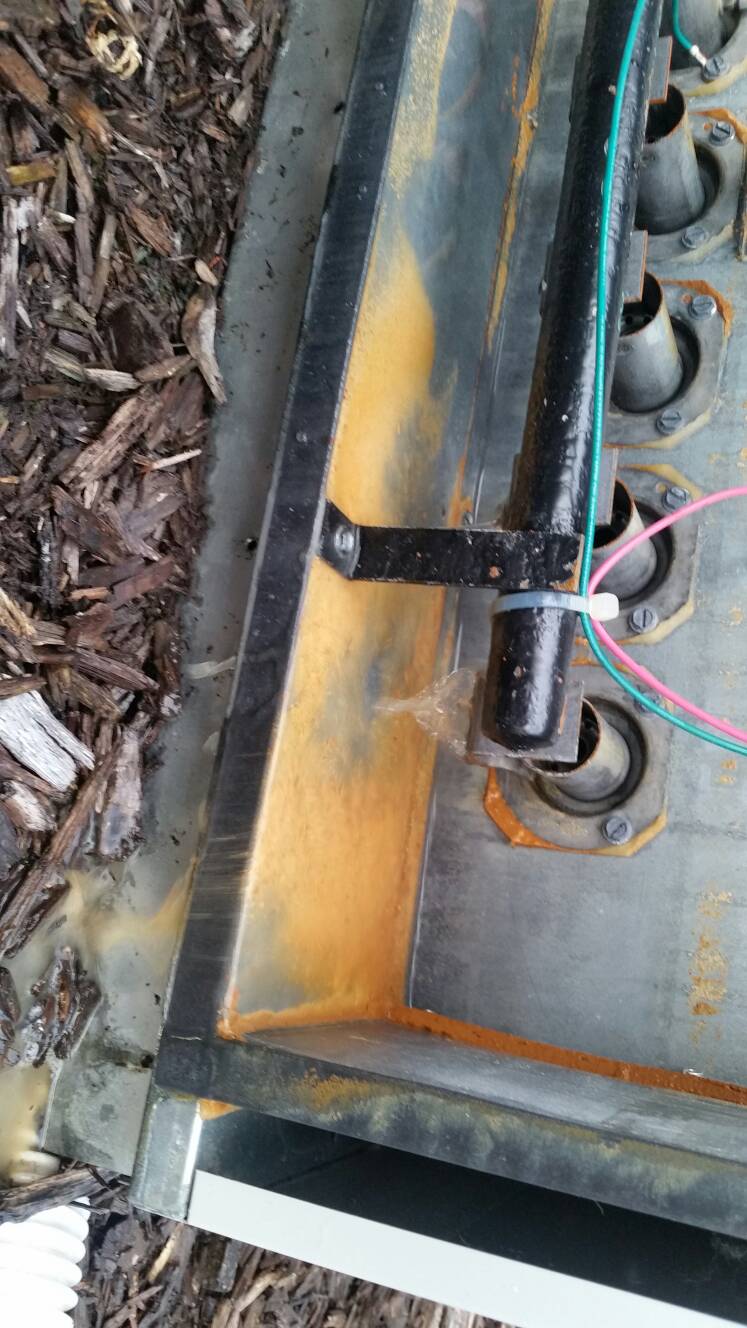 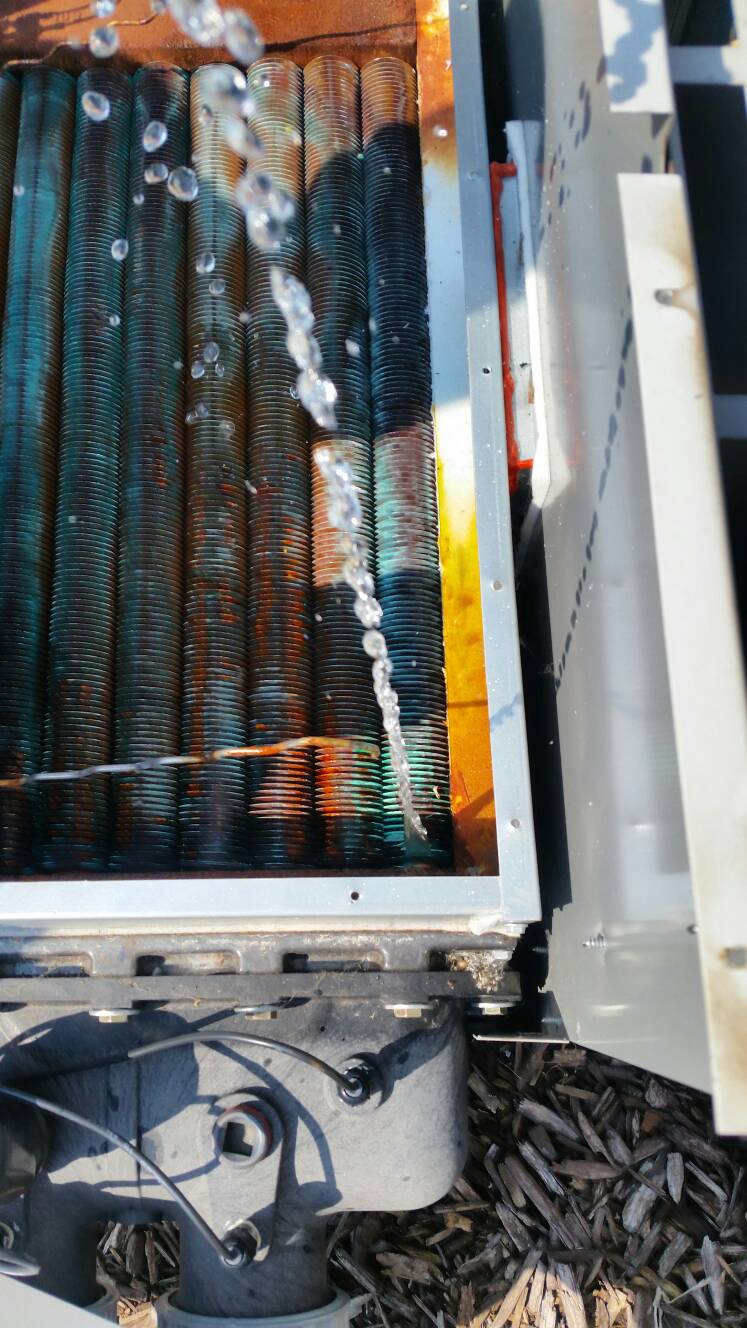 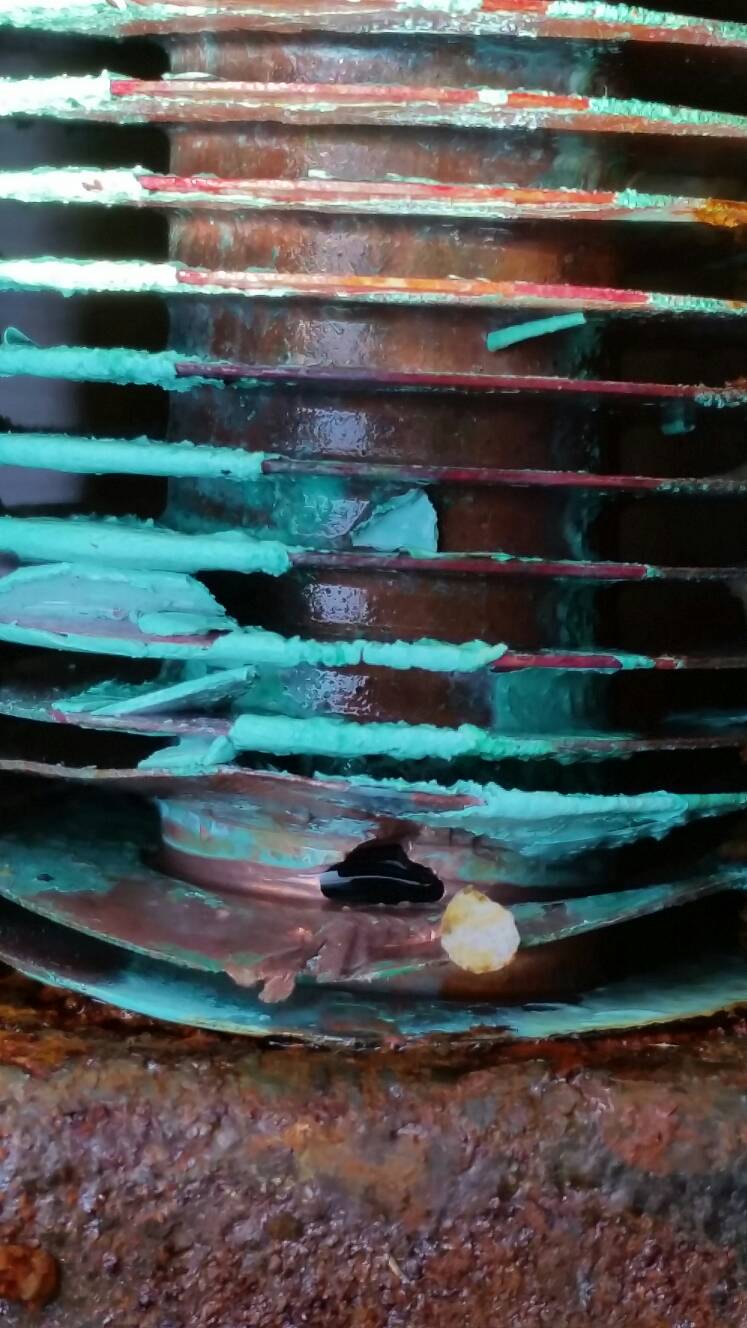 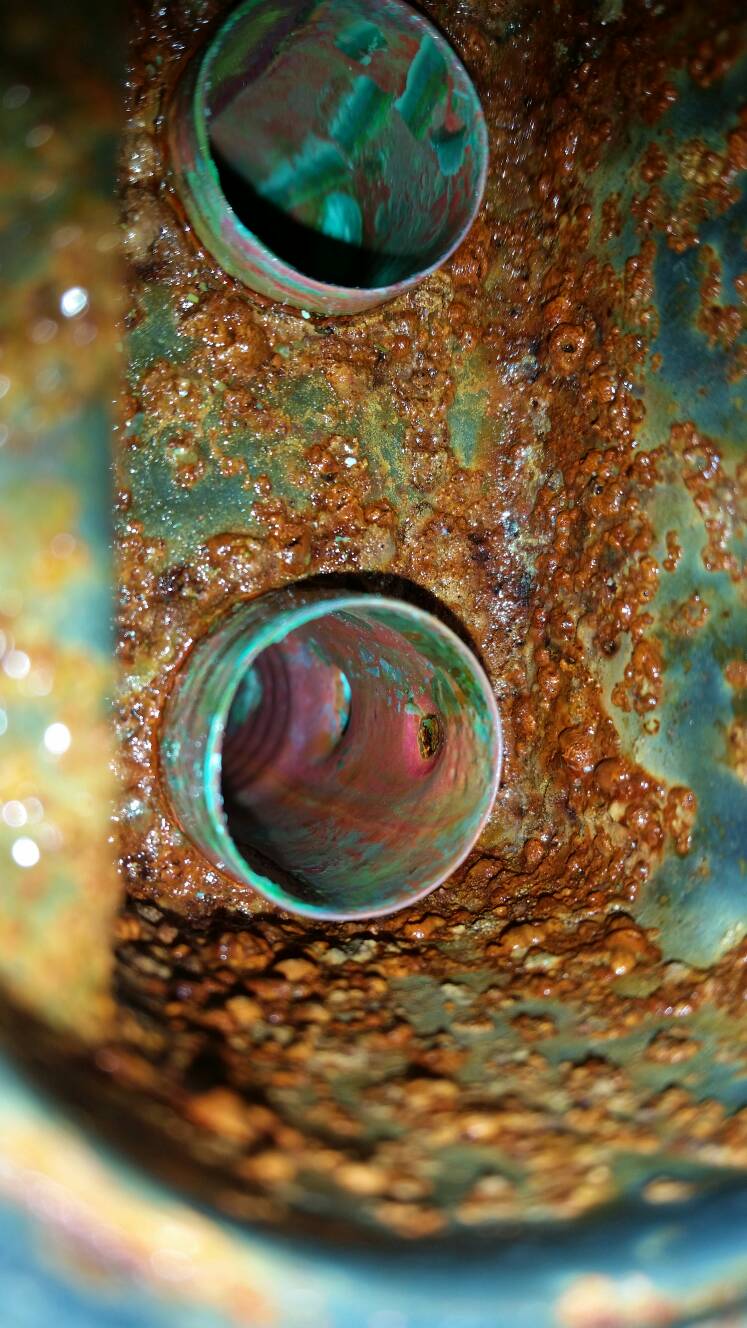 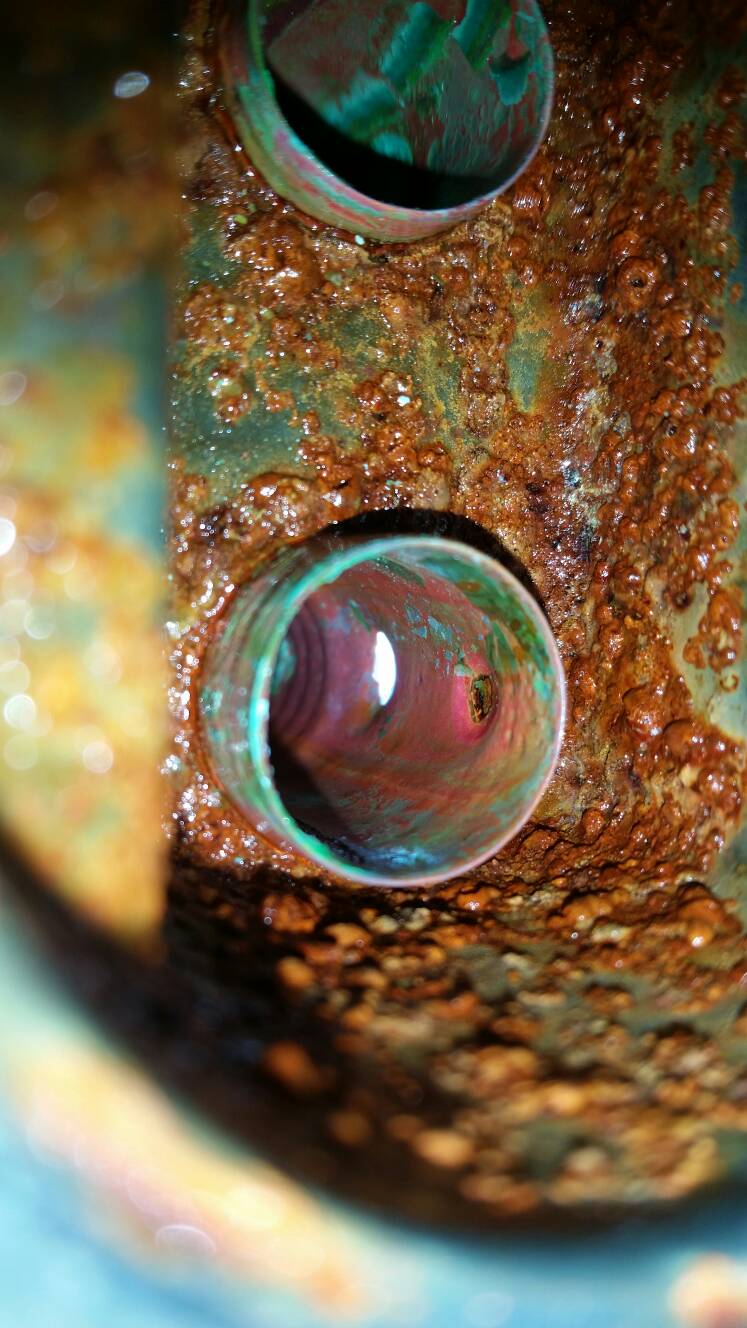 To be honest no heater would survive this amount of chemical abuse, I believe they will never warranty it so makes no sense to send back. I see you modified the frog chlorinator so you are probably using tablets and this could lead you to where you are now. Without a pic of the equipment setup hard to tell

That is 2 years old?

Given the state, I would suspect improper chemistry damage.
Can you post a picture of your equipment pad?

I think kadavis is suspecting the same thing that I am

Indeed, we are using the frog with tablets... How would that have led to this? We keep the chemistry in check. The frog is between the heater and the return, just like it should be (don't have a pic as it's disconnected at the moment).

Do you have a check valve between the heater and the frog?

What do you use to test the chemistry?
What is your typical pH and TA?

Looks like you have been swimming in chlorinated vinegar.
No warranty there, that is owner error.

Lochivar is a great product. I haven’t seen a newer one in a while, but they were built like tanks.
G

jblizzle said:
Do you have a check valve between the heater and the frog?

What do you use to test the chemistry?
What is your typical pH and TA?
Click to expand...

In doing some reading, it sounds like the check valve could be part of the issue (specifically, the lack thereof). I can thank the previous owner for that one. (It's our first pool; I didn't know any better, or I would have corrected that)

We call them guess strips. Your pH could have been much lower. I highly suggest you invest in one of the recommended test kits to take control of your chemistry.
G

jblizzle said:
We call them guess strips. Your pH could have been much lower. I highly suggest you invest in one of the recommended test kits to take control of your chemistry.
Click to expand...

Can you point the new guy in the right direction? I'd greatly appreciate it!

gijoecam said:
Can you point the new guy in the right direction? I'd greatly appreciate it!
Click to expand...

Welcome to the forum! :handshake:

Sorry, I don't have all the links readily available on my phone. But there is a link to the pool school article comparing the recommended test kits in my signature. Although I agree with the above that the tf100 is the best value

So should I bother repairing this one, or should I go with another brand (properly plumbed, of course...)

gijoecam said:
So should I bother repairing this one, or should I go with another brand (properly plumbed, of course...)
Click to expand...

I would get a new heater.

Well, you can get a new one for a little over 2 grand:

I'd go that route. Switching out the plumbing, gas line and electrical connection should be plug and play (definitely not worth $1000)!
G

sktn77a said:
Well, you can get a new one for a little over 2 grand:

I'd go that route. Switching out the plumbing, gas line and electrical connection should be plug and play (definitely not worth $1000)!
Click to expand...

Are there any substantial advantages or disadvantages to any particular brand? Seem that Lochinvar, Trane/Raypak, Hayward, and Pentair are all about the same price (or within a couple hundred bucks). Obviously the Lochinvar would be the easiest install, but if I'm spending my money, I may as well get something good!

Raypak seem to be the highest recommended heaters on the Forum. This is due to their Simplicity and ease of troubleshooting and repair as required

Obviously, you need to take some precautions with your plumbing and your Chemistry balance if you want your next heater to last longer
G

jblizzle said:
Obviously, you need to take some precautions with your plumbing and your Chemistry balance if you want your next heater to last longer
Click to expand...

Absolutely. The chemistry isn't perfect, but it's pretty stable, and I know I can make it better. I think the issue that caused this failure is the (lack of) check valve. Live and learn, I guess. All I can do is learn and move on.
I

I rarely use the inline puck chlorinator (usually liquid bleach). However, I don't have a check valve between it and the heater. The heater output is higher than the chlorinator - does chlorine concentration tend to settle like with liquid bleach?
You must log in or register to reply here.
Share:
Facebook Reddit Pinterest Tumblr WhatsApp Email Link

I have an 11 year old child

How do I heat and keep pool clean?

Drain or no drain a 25 year old pool?